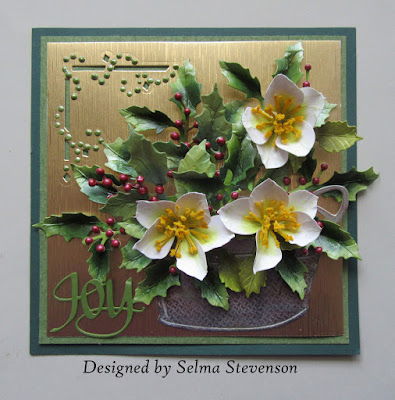 For the background I used the Tonic Golden Satin Luxury Embossed card stock.  I used the Tonic Dot and Drop Diamond Corner Die and then used Nuvo Bottle Bottle Green Crystal Drops for the Dots in the die cut corner.

The Garden Club Gathering Basket and Galvanized Bucket die set used to die cut the Bucket using Tonic Steel Diamonds Luxury Embossed Card stock.  A Tonic Dimensional Foam Pad was placed behind the bucket then Tonic Adhesive Tape Runner used on sides and bottom to adhere to the bottom of the card.

The sentiment is from Suzanne Cannon's A Way With Words die set.

I have added links to Tonic Studio's products below.  If you use these links to purchase products, I will receive a small commission which helps me purchase supplies -- no additional cost to you.  I appreciate you visiting my blog and appreciate your support.

So pretty and I especially love the colors you used, Selma.