You Inspire Me Shadow Box 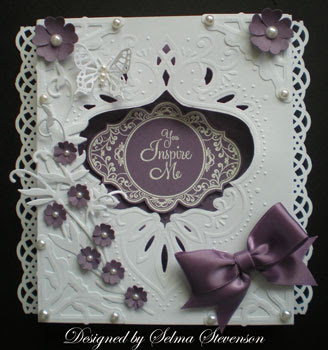 You know how I love to create Shadow Boxes.  I couldn't resist using this new Marianne Design embossing folder (DS0912) I just received from Joan's Gardens to create the opening in this shadow box.  The center of this embossing folder is not cut out when embossed but the small decorative cuts in the design do cut out at the same time the design is embossed on your card stock.  I cut the center out of this embossed design in order to create the opening in the shadow box to reveal the sentiment.
To start with, I cut two 6" squares of white card stock.  Two sides were scored at 1/2" to create the "wall" for two sides of the shadow box.  These score lines are to be creased well with a bone folder.   For this card, the Marianne embossing folder was centered between the two score lines on the piece to be used for the top of the shadow box.  It was run through the die cutting machine.  Scissors were used to cut out the large center of the embossed design.
For the inside of the shadow box, a piece of card stock was cut 5" x 6".  This covers the inside of the shadow box.  I wanted an embossed area under the cut out top opening, so I used the Cuttlebug Swiss Dots embossing folder.  I just placed it across the center of this piece because the end portions do not show.  The JustRite "Kindness" stamp set was used for the frame and sentiment.  They were white embossed on another piece of purple card stock and cut out with scissors.  The be sure the sentiment was exactly where I wanted it, I flattened both the top and bottom pieces of the box, lining out all outside edges.  There was dimensional tape on the back of the sentiment and it was placed right in the center of the opening.  Perfect fit!
I wanted to add some additional embellishments to the front of the card.  Four Marianne corners (LR0143) were cut, embossed and placed on each corner.  There are two different corners in this package.  Two Marianne "Garden Branches" LR0151 were die cut using white card stock.  I would normally use green card stock for leaves,  but I wanted to use only purple and white on this card.  These two branches were placed on the left side of the opening in the embossed design.  Both the large and small flowers were created with the "Blossom" flower punches.  The small flowers were arranged on the white branches and one each of the large flowers attached on each upper corner.  Kaiser Craft Pearls were added to the center of each flower plus on the corner pieces. The pearls add "elegance" to the card, don't they!   One white Cheery Lynn "Mini Butterfly" (DL112) was also added.  Three pearls were also added to the body of the butterfly body.  A bow was added  to complete the front.
To attach the two sides of the shadow box, a long strip of ScorTape was added on the backside of the top piece.  Before removing the protective cover of the tape, the score line on each side of the top and bottom, were creased again to form a crisp fold.  The tape shield was then removed and pressed down the backside of the bottom piece.  You now have a completed box.  When you create this type of shadow box, it will fold flat by pushing the box to one side.  I like to add the punched border on each side of the box.  To do this, I use a piece of card stock 6" x 6" and punch down the two sides.  Scor-Tape  is added to the two long sides of the shadow box and centered over the backing.
I hope you love all these new Marianne Design products as much as I do.  As you know, all these products can be purchased from Joan's Gardens.  Below is a picture of the Marianne Embossing Folder I used for this card.