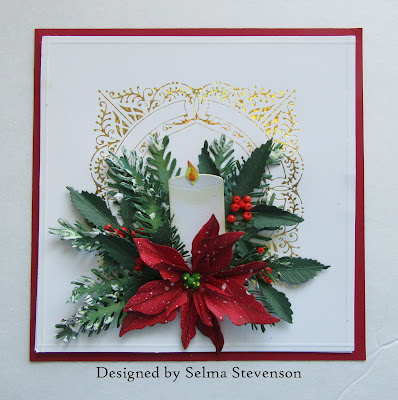 Good Morning my crafty friends.  I am happy you came to visit my blog.
This is a 6-inch square card.  For the gold design, I used a piece of white glossy cardstock and used the Spellbinders Merry Filigree Quatrefoil glimmer plate and gold foil.  I love using the Spellbinders Glimmer Foil System for adding beautiful foil accents to my cards.
Using Susan's Poinsettia die set, one poinsettia was created.  It was die cut using Susan's Specialty Cardstock.  Susan's Flower Tool Kit was used to create the veins before coloring.  This helps to bring out the scored lines after they are colored.  Using the Waffle Flower Media Mat and brushes, red ink was applied to the leaves.  White acrylic paint was thinned then using a small paint brush to pick up the paint, it was flicked over the colored die cuts.  The bracts were made using green Nuvo drops and a small yellow Prill pressed in on the top.
The Garden Lantern die set includes a candle die.  This was die cut using white glossy cardstock.  The flame was colored using alcohol markers.
The Pinecone & Evergreen Bough die set was used for the  Evergreen Boughs.  The Winterberry & Mistletoe die set was used for the other greenery.  Red berries were added to the Winterberry branches.  Snowflake paste was added to some of the greenery. 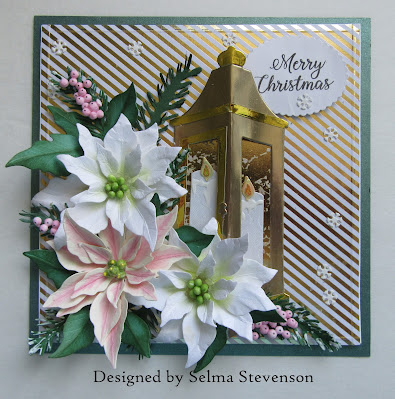 Good Morning.  I am happy you came to my blog. I would love it if you would leave a comment below to let me you came to read about how I created this card.
I am still working on my Christmas cards.  I love Susan's new Garden Lantern and Poinsettia die sets so created another card using these  sets.
This is a 6-inch square card.  On the front I added a piece of foiled, gold striped card stock from my stash.
Using the Garden Lantern die set, the lantern was die cut using a gold metallic card stock. The lantern was die cut a second time, using gold mirror cardstock.  Using scissors, the trim on the lantern was cut out and glued to the gold metallic lantern.  The top ornament and latch for the lantern were also die cut using the gold mirror card stock.   A piece of marbled gold card stock was used for the background at the back of the lantern.  Using the candle die from the Garden Lantern die set, it was die cut using a textured white card stock.  It was cut in half length wise then edges on the cut side were rounded to match the other side.  White Nuvo Crystal Drops was used to create melted wax along the top edge of the candle.  The flames were die cut using yellow and orange metallic card stock.  The two candles were shaped to appear round and attached inside the Lantern.
Using the Poinsettia die set, three poinsettias were die cut using Susan's Specialty Cardstock from Spellbinders.  The poinsettias were shaped using Susan's Flower Tool Kit.  Watered down light pink watercolor was brushed down the center down the petals on one of the poinsettias.  For the center of each poinsettia, I used green Nuvo drops and added a yellow Prill to the top of the bract on the pink poinsettia.  The glue used for assembly is the Bearly Art Glue.
The Pinecone & Evergreen Bough die set was used to die cut the evergreen boughs.  Pink Styrofoam balls were used for the berries.  A black fine tip pen was used to push down on each berry.
Susan's Holiday Quotes stamp set was used for the greeting.  It was die cut using a scallop oval die.  It was attached using double sided dimensional dots.
I am often asked about different products I use, so I have tried to add links below on products I used to create this card plus a lot of other products I regularly use.
I hope you like visiting my blog.  Happy crafting! 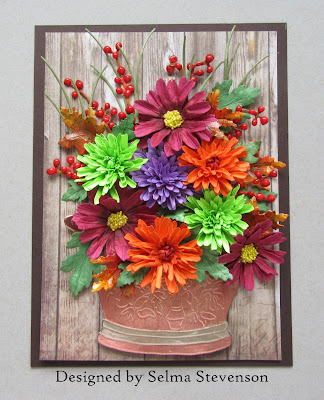 Are you ready for Autumn?  Today it is very cool outside and the leaves are changing colors.  I decided to create an Autumn bouquet using Susan's Button Daisy & Chrysanthemum, Cactus Dahlia & Ornamental Garden Pottery, Foliage & Ladybug, and Woodland Garden Leaves die sets.
Using the Cactus Dahlia & Ornamental Garden Pottery die set, the pottery was die cut using a piece of bronze metallic card stock.  It was die cut a second time using gold metallic card stock and the two gold bands were cut out with scissors and glued to the pottery.
Using the Button Daisy &  Chrysanthemum die set, flowers were die cut using Susan's Specialty Cardstock, colored, and shaped using the Deluxe Tool Kit.  They were assembled using Bearly Art Glue.  Yellow Prills were added to the center of the Button Daisies.
The Foliage & Ladybug die set was used for the berry branch and red Nuvo drops, now sold by Spellbinders, was used for the berries.
The Woodland Garden Leaves die set was used to die cut five of the small maple leaves.  They were colored, shaped then clear crystal glaze added.
A piece of woodgrain design paper from my stash was used for the background.
All the beautiful mums are now out at all the grocery stores and florist shops, which gets us all ready to decorate for Autumn. 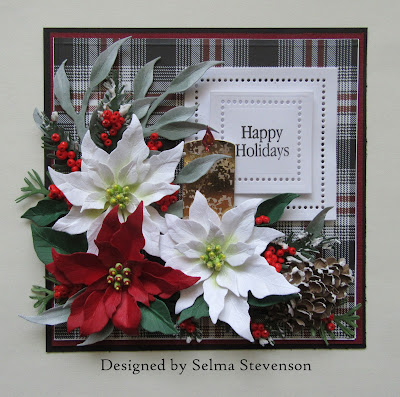 Today I wanted to create a masculine Christmas Card using Susan's Poinsettia die set from Spellbinders.  Other die sets used are shown in bold print.
This is a 6-inch square card.  I used a piece of plaid design paper from my stash for the background.
On the upper right side, I used the Spellbinders Essential Squares die set to die cut the two white squares. In the center of the smaller square I used one of the stamps from Susan's Holiday Quotes stamp set.  Both squares were attached using dimensional tape.
Using the Poinsettia die set, three poinsettia were created.  Susan's white Specialty card stock from Spellbinders was used and her Deluxe Tool Kit was used for shaping them. The glue used is Bearly Art Glue.   Green Nuvo Drops, Prills and Pollen was used for the bracts.
The Foliage & Ladybug die set was used for the Eucalyptus leaves.  The Pinecone and Evergreen Bough die set was used for the evergreen boughs and the pinecone.    Snow was added to the evergreen boughs and clusters of red berries.  The berries were created using bean bag styrofoam balls that were painted red with acrylic paint.
The Garden Lantern die set includes a candle.  The candle was die cut using a piece of card stock from the DCWV Mercury Glass Cardstock Pad. 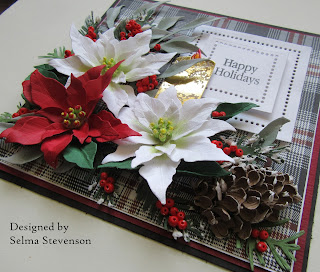 I love how realistic the poinsettia and pinecones look using Susan's die sets.  For help in knowing how to assemble Susan's flowers, you can watch her Spellbinder YouTube Videos or also get instruction on her Facebook Garden Club Live Videos.
I have links for products used and a lot of other products I use below. 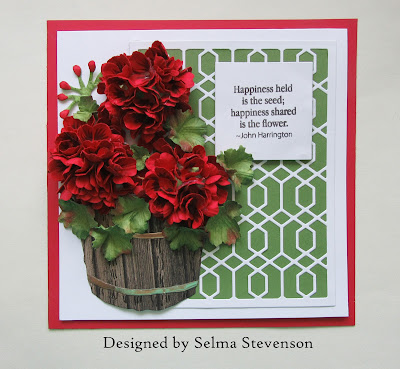 Hello Paper Gardeners!   Today I have a card created with Susan's Geraniums & Antique Wooden Bucket die set from her Summer Release from Spellbinders.
This is a 6-inch square card.  I used a background die from my stash for the background.  It was die cut using white card stock and backed with green card stock and attached to the right side of the card front.
The Geraniums & Antique Wooden Bucket die set was used to die cut the Antique Wooden Bucket.  Gold mirror card stock was used to create the bands around the bucket.  The bucket was attached using dimensional tape in the center and glued on both sides, to give it dimension.  The same die set was used to die cut enough pieces to create three geranium flowers. They were die cut using Susan's Specialty Card Stock from Spellbinders.   They were shaped using Susan's Deluxe Flower Tool Kit and assembled using Bearly Art Glue.  The geranium leaves were die cut using white card stock, brushed with green ink and edged lightly with red ink.  They were shaped and attached around the flowers.
One of the quote from Susan's Spring Quotes stamp set was used.  It was stamped using VersaFine Black Ink then cut out using one of the square dies in the Spellbinders Essential Squares die set.