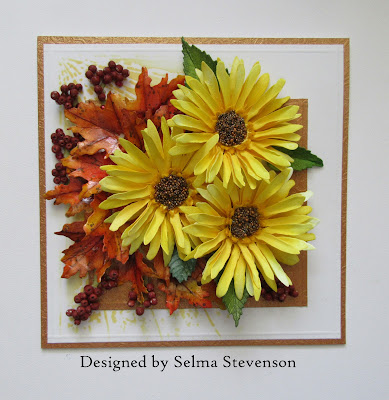 The weather has been crazy.  It was very cold with snow in the mountains, and today the sun is shining and the colorful autumn leaves look beautiful.
Today I decided to duplicate some of the beautiful autumn leaves to show off these sunflowers.
This is a 6x6 inch card.  I used a piece of embossed metallic card stock for the base card.  A piece of vanilla card stock was cut slightly smaller and scored around the edges.  On this piece I stenciled on a design then added another piece of the embossed metallic cardstock, which was also scored around the edges.
Susan's Woodland Leaves die set was used to die cut the maple leaves, using Susan's Specialty Cardstock.  They were brushed with marigold, orange, and brown inks.  Dots were added for a realistic appearance.  The leaves were attached to one side of the metallic cardstock.
Susan's Berry branch was die cut and small red styrofoam balls, that were colored dark red, were added to the branches.  They were attaced under the autumn leaves.
Using Susan's Sunflower die set, three sunflowers were created. They were die cut using Susan's Specialty Cardstock.  They were brush with yellow inks on the Waffle Flower Media Mat then shaped with tools from Susan's Flower Tool Kit.  They were glued together using Kids Choice Glue that was put in the Sili Glue Pod.   Both Prills and Pollen were added to the center of each flower.  A few sunflower leaves were added around the flowers. 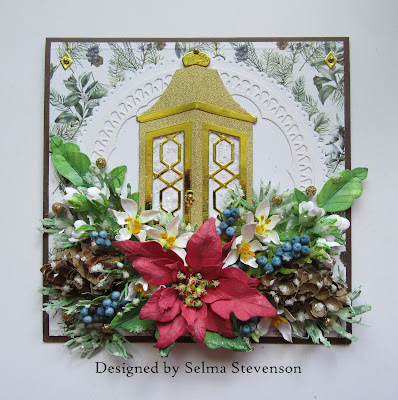 Good Morning.  The holidays will be here before we know.  Today I have another Christmas card decorated using Susan's Garden Lantern and her pretty poinsettia die sets
.
This is a 6x6 inch card.  The design paper used is from the Paper Heaven-White As Snow - design paper pad.  A dotted scallop circle was die cut and inside I  another die cut using Spellbinders Brillante Rondelle die set, which I think is now retired.
Using Susan's Garden Lantern die set, the lantern was die cut using a smooth gold glitter card stock.  It was die cut again using gold mirror card stock and the trim around the window and at bottom of lid were cut out using scissors, then glued to the lantern.   In my stash, I have a background die by Momenta, that I used to cut out part of the design to place behind the window openings.  This was die cut using gold mirror card stock.  Spellbinders gold embellishments were used for the top and knob of the lantern.
The Poinsettia die set was used to die cut a poinsettia out using Susan's Specialty Cardstock.  It was brushed with red ink on the Waffle Flower Media Mat and shaped using Susan's Flower Tool Kit.  Small styrofoam balls were colored, using acrylic paint.  Tiny red Prills were added to the top of each ball then a light dusting of yellow pollen was glued to the bracts.
Susan's White Pine die was used for the greenery.  The Pine Cone die set used to create two pine cones.  Susan's Star Jasmine die set used to create several jasmine stems.  For the berries, small styrofoam balls were colored with blue acrylic paint and glued to Susan's Berry Branch die cut.
All these die cuts were arranged at the base of the lantern.  Once the arrangement was dry, I added dots of Bearly Art Glue around it then sprinkled on Twinklets Diamond Dust.
Have you started creating your Christmas Cards yet? 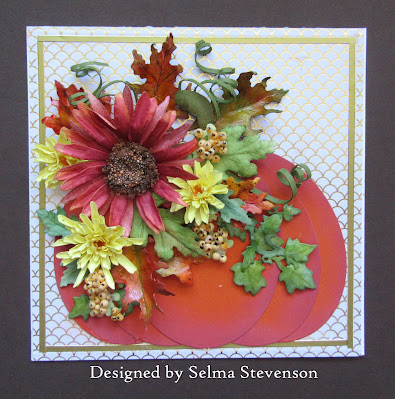 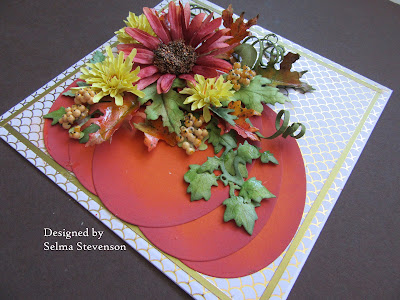 Today I decided to create a pumpkin using oval dies.  I used an oval die that is approximately 3 inches wide (short sides), and die cut 5 of them out of the Spellbinders Persimmon cardstock.  Around the edges I brushed on Distress Fired Brick Oxide Ink.    To arrange them, I used one for the center then two on each side, that were slightly tipped in on the top.  A stem was can cut, using green card stock, then brushed with brown ink.
Using Susan's Sunflower die set, a flower was created.  It was die cut using Susan's Specialty Cardstock and color brushed on the petals.  For the center, Prills were added then dots of glue around the edge and brown Pollen added. For the adhesive, I used Kid's Choice Glue, which I squeezed into the Silli Pot (linked below).
The Chrysanthem die set was used to create three yellow flowers.  The petals were shaped by using the fine tip tweezers, that are in the Flower Tool Kit,  and pinched up.  The leaves were die cut using watercolor paper, color brushed on and shaped using the tools in the Flower Tool Kit.
Susan's Berry Branch die was used to die cut the berry branch.  I used small styrofoam balls for the berries.
Long narrow strips of green cardstock was used to create the curled vines around the flowers.
Susan's Woodland Leaves die set was used to die cut the autumn leaves.  They were colored, shaped then brushed with Clear Crystal Glaze.
The Ferns & Ivy die set was used to die cut the lvy.  It was cut apart and placed under the flowers. Hello my crafty friends.  Today I decided to create another Christmas card.  Have you started making your cards for the holidays?  All my friends look forward to receiving my Christmas cards because they always have pretty arrangements I created using Susan's Garden die sets.
This is a 6x6 inch card.  The base card is tan.  For the background, I used the Sizzix Impresslits A2 Cut & Emboss Folder.  Once it was embossed, I used a sponge and lightly sponged on light gray ink over the stones. Inside the window cutout, I added a piece of Paper Heaven-Golden Dreams design paper.  To create the green shutters, I used the cut & emboss folder and a piece of green card stock over the shutter portion, and ran through the die cutting machine.  The outside of the shutters was cut out using scissors, then glued to the white shutters.  Two small gold Spellbinders embellishments were added for the knobs.
Susans's White Pine die was used to die cut nine branches.  They were sponged using green ink on the Waffle Flower Media Mat,  and each pine needle cut in half using the scissors in Susan's Flower Tool Kit.  Snow was added to the tips.  Susan's Berry Branch was die cut using white card stock, and sponged green.  For the berries, I colored small white flat backed pearls with a dark red Copic marker.
One pine cone was created using Susan's Pinecone die set.  It was die cut using brown card stock and the tips were brushed with white pigment ink.
Susan's Poinsettia die set was used to create the pink/white poinsettia.  It was die cut using Susan's Specialty Cardstock.  A pink Copic Marker was used to color the center of each petal.  Using Susan's Flower Tool Kit, the poinsettia was shaped.  For the bracts, I added both yellow and green Nuvo drops.
I have links below for the products I used.

Today Is A Good Day To Smile 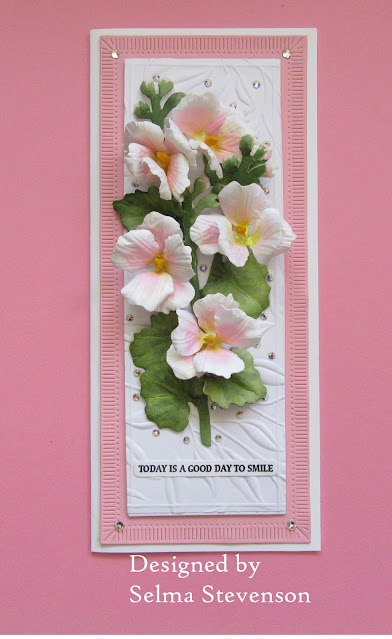 Today I created a slimline card and decorated it using Susan's Garden Hollyhock die set.
Spellbinders Fluted Classics Slimline die set was used to die cut the pink frame.  In the center of this frame, I die cut a white rectangle using the same die set then embossed it using the Spellbinders 3D Leafy Embossing Folder.  I used the Scor-Pal to draw a score line around the edges for a finished appearance.
Using Susan's Hollyhock die set, three stems were die cut out of water color paper, colored and shaped.  They were glued to the card.  The same die set was used to die cut the hollyhock petals out of Susan's Specialty Cardstock.  I used two shades of ink to sponge on the base of each petal.  In the center, I used a light green PanPastel.  For the stamen, I colored the die cut yellow then added glue to the base and each point, rolled it up, using the Tweezers in the Flower Tool Kit, pressing the three stamen points together to form one stamen.  Then glue was added to the front and back of the stamen and dipped in yellow pollen.  Hollyhocks have just one tall stamen.  The leaves were die cut using watercolor paper, colored using markers, then the stem lines highlighted with light green PanPastel.  They were spritzed lightly with water before shaping them with the tools in the Flower Tool Kit.
The sentiment I used is a stamp from my stash. 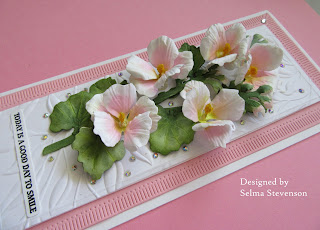 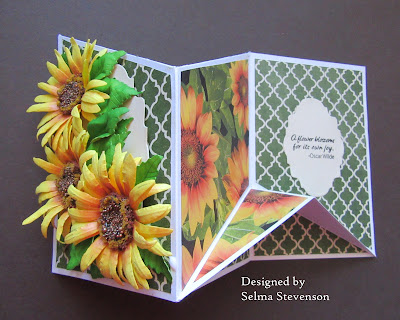 Hello Paper Crafters.  Today I have an unusual shaped card that was fun to create.  I used a piece of design paper for the inside and created Sunflowers using Susan's Sunflower die set.
The name of this card style is Trifold Miura Ori Card.  I followed the tutorial by Iced Images on YouTube.  It is created using just two pieces of white cardstock for the card base.
Design papers from my stash was used to decorate the card.  Susan's Sunflower die set was used to create the sunflowers.  I tried to duplicate the flowers in the design paper.  The photo distorts the colors on the flowers created.  The centers of the flowers in the design paper are fairly large so I created my flowers very similar.  I used Prills over the small die cut pieces to be used in the center. 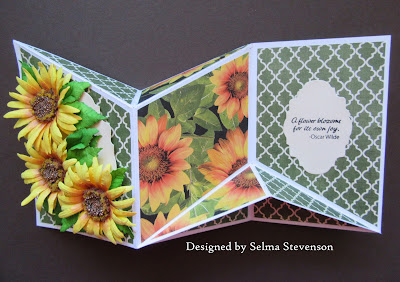 On the inside of the card I used one of the stamps from Susan's Clear Stamp Set. 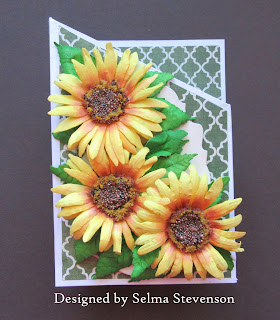 The finished card is 5x7 inches when closed.
Below I have links to Susan's Sunflower die set plus I have added products for Susan's newest winter release.