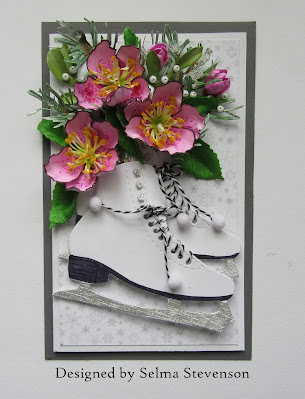 Good Morning Friends.  Today Susan's new Winter Garden release from Spellbinders is available from Craft & Craft TV in the UK.  Susan's design team will be posting samples today of this beautiful new release.
Today I have a card designed using the Skate, Helleborus, and White Pine dies.
This is a mini slimline card.  I used a piece of design paper from the Paper Heaven White As Snow 6x6 paper pad, which a sweet friend sent to me.  Thank you Catherine.
The Skates die set was used to die cut two skates.  I used a heavy weight white card stock.  The soles of the skates were colored with a black Copic marker then a fine line black pen used to draw detail lines in the heals.  Black and white twine was used to create the laces.  I have a variety of pretty twines linked below that can be used for laces.  On the ends of the laces, I glued on a small white pom pom.  For the blades of the skates, I used a piece of brushed silver cardstock and die cut only the blades out of this cardstock.  The top edges were trimmed and the silver blades glued over the white blades of the skate die cut.  Using the same silver cardstock, I used a 1/8 circle punch and punched out three circles and glued them to the top of the boot lacing, pulling them out for dimension.
To fill the skates, I used the Helleborus die set and die cut pieces for three flowers and two buds.  These pieces were die cut using Susan's Specialty Cardstock.  The flower petals were put on the Waffle Flower Media Mat and pink ink brushed on both the top and bottom, using blending brushes.  Using Waffle Flower Shading Brushes, bright pink ink was brushed on at the base of the petals.  Using a fine tip dark pink marker, small dots were added to the base of each petal.  A dark purple marker was used to add ink to the outside edges of the petals. The stamens were die cut using a soft yellow card stock.  Lime green ink was brushed at the base of the stamens, then each stamen cut in half, for fullness.  The tips of the stamens were dipped in glue and a tiny bit of yellow Pollen added.    Susan's Flower Tool Kit was used to shape the flowers and leaves.  Two buds were created with one of the die cut flower petals.
The new Winter Evergreen Foliage die set was used to die cut the White Pine branches.  Eucalyptus branches from Susan's Holiday Flora release were die cut and white berries added.  The berries are small white bean bag styrofoam balls.  A black pen was used to add dot on end of each berry.
You can view products I use from the links provided below. 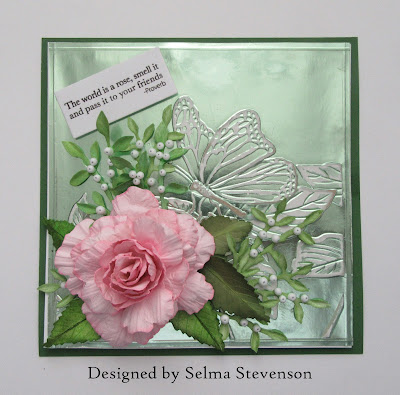 Good Morning.  As you know, I love creating roses with Susan's die sets.  Today I have a pretty floribunda rose on an embossed folder.
This i a 6x6 inch card.  For the background, I used the Altenew Gentle Butterfly 3-D embossing folder to emboss a light green metallic piece of card stock.  Once it was embossed, I used a craft sanding block to rub off some of the metallic, leaving the design white.  Using a Scor-Pal, an 1/8th inch line was scored around the edges of this metallic piece.
Using Susan's Floribunda Rose die set, one rose was die cut using Susan's Specialty Cardstock.  The petals and leaves were colored by using the Waffle Flower Media Mat and Blending Brushes to brush on two shades of pink ink.  They were shaped using Susan's Flower Tool Kit, then assembled using Bearly Art Glue.
The Foliage & Ladybug die set was used to die cut the leafy branches.  Small white Styrofoam balls were used for the berries.  They were glued on the leafy branches using Bearly Art Glue.  Once dry, a black fine tip pen was used to push down on the top of each berry.
One of the stamps from Susan's Through The Garden Gate Stamp Set was used for the sentiment.  It was die cut using the Spellbinders A2-Mattic Basics A die set. It was attached using dimensional foam tabs.
Using the 3-D embossing folder on metallic cardstock, and sanding off some of the raised portion, was a fun technique and a beautiful background for the pretty rose.