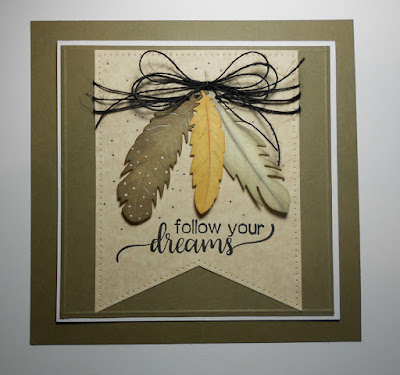 Today the new stamps and dies are now available from Elizabeth Craft Designs on the "New Arrivals" link.

The Feathers were die cut and color sponged on.  They were arranged at the top of the Stitched Fishtail and a black cording bow added to tie them together.  The sentiment was stamped using VersaFine Black ink below the feathers.

Be sure to go over to the Elizabeth Craft Designs store to check out all the "New Arrivals" for to create your special projects.

Links to the products used today are listed below.  Thanks for stopping by.

InLinkz.com
Posted by Selma at 10:19 AM 2 comments Need a sweet Valentine for someone special?   Today I have designed a lavender Valentine using the new Els van de Burgt Stitched and Dotted Scalloped Valentines.

The roses were created using the Garden Notes Rose 2 die set.  They were die cut using white card stock and lavender PanPastels sponged on the base of each petal to give them a two toned color.  The greenery behind the roses are the leaves from the Leafy Branch 5 die.

The sentiment was die cut using black card stock and the A Way With Words - Sweet Smiles die set.

This is a 6 inch square card.  A piece of lavender design paper was used for the background.  The die cut hearts were layered with dimensional tape between layers.  The flowers were arranged on the left side of the hearts with the sentiment on the right.  A few pearls were added for embellishment around the roses.

Thank you for stopping by.  All the products are listed below.

InLinkz.com
Posted by Selma at 5:00 AM 4 comments 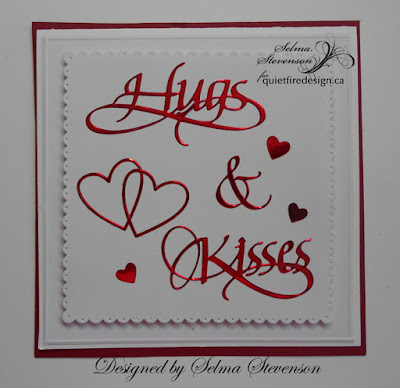 Good Morning.  Today I have a card I designed for my Quietfire Creations Design Team Blog Post.

To create a special effect, I have die cut the Sentiment using Clear Double Sided Adhesive on the back of a piece of Red Shimmer Sheetz.

To add a little more love to the card, I used the  Elizabeth Craft Designs Entwined Hearts die set to die cut hearts, also out of the Red Shimmer Sheetz.  The background was die cut using the  Dotted Scalloped Square Frame die.

When you use Suzanne's A Way With Words die cut Calligraphy Sentiments, you will be adding beautiful class to your cards. 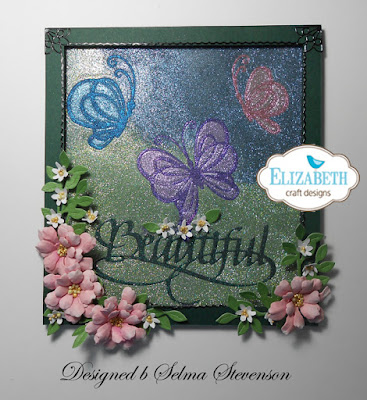 Each Friday, I always look forward to watching the Elizabeth Craft Designs - Technique Friday with Els YouTube Videos.  This card was inspired by her Glitter Imprint Technique, which you can watch at this LINK.

While watching the video, I visualized the new ModaScrap Dancing Butterflies in Glitter and also one of the A Way With Words Sentiments.  I chose the new Beautiful die set for this card.

The card was created following Els instructions for doing the die imprint.  The dies were run through the die cutting machine, leaving the imprint and then different colors of Silk Microfine Glitter added. One thing you need to be careful of, is to make sure the protective sheet over the adhesive is firmly pressed down before adding glitter to the areas you have pulled off the protective sheet.  If it is not, you will end up with glitter "leaking" down on the background. This happened to me at the bottom of the purple butterfly and I did not realize it until I pulled off the background sheet.  Luckily I was able to cover that little mistake with some small flowers!

To glitter the background, I pulled up the bottom portion (below the butterflies) of the protective sheet and poured on green glitter.  Normally you rub the glitter in well before using the next color, but I did not do that on this background.  I wanted a blended background, going from green on the bottom to blue on the top. The green glitter was rubbed in to  about an inch from the edge.  The blue glitter was poured onto the background (with the top of the card facing down) and the blue glitter was poured over part of the green.  This caused a mixture of the glue and green which did not cause a sharp line between the two colors.  The entire background was polished with my fingers to bring out the shine.

Once the glittered "picture" was complete, a dark green frame was cut to fit around it.  To give it some dimension, it was was attached using dimensional tape around the edges.  Black Peel Off Line Stickers were added around the inside edge of the frame to give it a finished appearance.

To decorate the bottom of the card, I used Susan's  Garden Notes Zinnia die set to create the flowers.  I used Prills for the center of each flower.  The small flowers were created with the flower die in the CountryScapes Clematis Ivy die set.  Prills were also added to the center of each of these flowers.  The new ModaScrap Leafy Branch 4 die set was used to die cut the leaves behind the flowers.

Els has a lot of fun techniques using the Silk Microfine Glitters on YouTube.  I hope you will check them all out for inspiration.

The products used are listed below.

InLinkz.com
Posted by Selma at 6:08 AM 2 comments 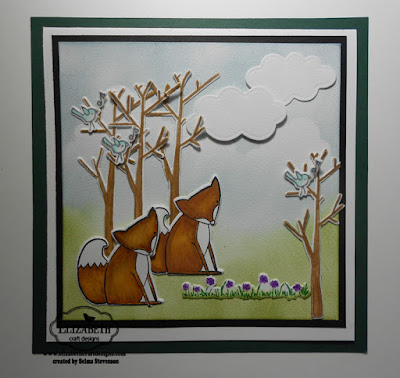 The stamp set used for this card is the Woodland Pals stamp set and matching dies.

The background was sponged using the  Earth & Sky Stencil to add light clouds in the background.  In the foreground, Joset Designs Rainbow Sky die set was used to die cut two dimensional clouds.

The Woodlands Pals stamp set was used to stamp all the other elements to design the card.  They were colored using markers, die cut with the matching dies and attached to the card.

All the new stamp sets come with matching dies to make it easy to cut out the images and arrange them anyway you want on your project.