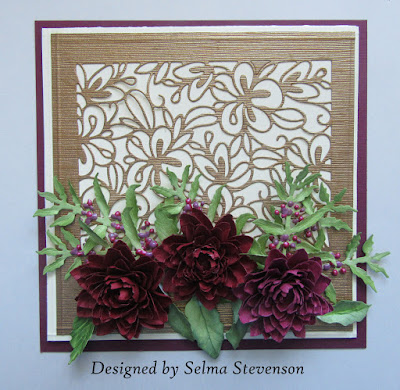 Today I created six macroon Pom Pom Dahlias using Susan's Garden Notes  Dahlia die set from Tonic Studios. You can click on the link below that says "Image Available Soon" to purchase any of Susan's Garden Club die sets.  I created one card using  three of the dahlias using a beautiful background die from Tonic Studios.   I wasn't sure if I liked the arrangement, so using the other three flowers, created a second card with the same die cut background.    I decided to post both cards. 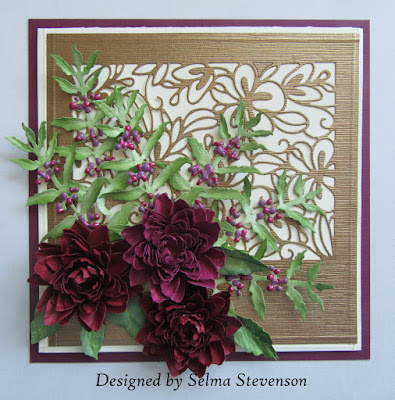 The Beauty Berry Bush branches were die cut using white card stock and Nuvo Safari Green Ink was sponged on both the front and back of the die cuts.  Nuvo Plum Pudding Crystal Drops were used for the berries.  The branches were shaped and placed on the card then three of the Maroon Pom Pom Dahlias were added.  I like to create my flowers right on the Tonic Glass Mat.  I start with the bottom petals and keep adding layers.  Some of the glue will stick to the glass mat and holds the flower in place until all layers are added.  I used the scrapper in the Tim Holtz Media Tool Set to gently remove the flower.  The glass mat cleans up really easily by just using a baby wipe.

I have added links to Tonic Studio's products below.  If you use these links to purchase products, I will receive a small commission which helps me purchase supplies -- no additional cost to you.  I appreciate you visiting my blog and appreciate your support.