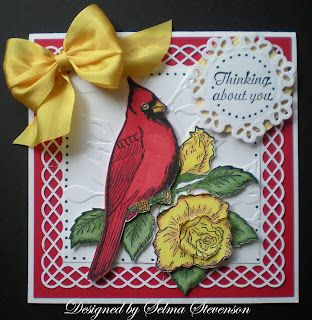 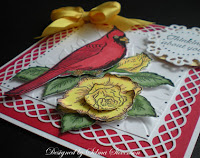 This is another one of the new Heartfelt Creations Spring Cardinal stamps called "HCPC 3382 Magnificent Cardinal Rose PreCut Set".  A punched white backing was created with the Martha Stewart "String Lace" border punches.  An additional white square was embossed with the Cuttlebug "Leafy Branch" embossing folder for the center.  The cardinal was stamped with black Memento ink, colored with Copic markers and cut out.  It was attached with dimensionals.  An extra cardinal and rose were stamped so they would be dimensional.  The sentiment is also from Heartfelt Creations and was cut out with one of the new Spellbinder dies.  It was attached over a yellow "Big Scalloped Circle" Nestability.   A yellow bow was added to complete the card.

You can order your Heartfelt Creations stamps from Joan's Gardens.

The Other Patti Sue said...

Stunning Selma! Your making some beautiful creations with these new images!

Amazing work! Love the layout and your coloring is just beautiful!

Beautiful card, Selma. Love the colors. How do you get your bows to look so perfect? Have a wonderful day!

Beautiful card-love cardinals and I like the sentiment frame!