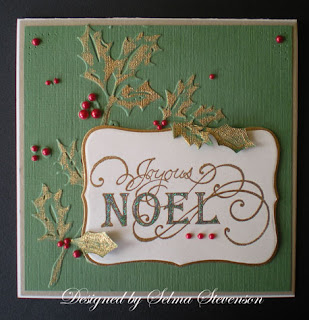 Have you seen the sneak peaks for the new stamp sets that will be released at Heartfelt Creations on September 28th?  The above card is one that is featured on the Heartfelt Creations blog this week.
This card was created using the Heartfelt Creations “Joyous Noel Precut” stamp set. The greeting was Gold embossed on ivory card stock and cut out with a Nestabilies Label Eight die. This was embossed in the die and the very edge cut off with scissors so I could add a gold border. The same size die was used to cut out another label in shiny gold card stock. This gave me a nice even border around the edge.

The Cuttlebug “Holly” embossing folder was used for the embossed background on the textured green card stock. Brilliance Gold ink was used to create texture on the holly. They were embossed with detail gold embossing powder. One of the leaves in the embossed design was cut around with a knife so it would lay on top of the label. Two of the smallest holly leaves from the Heartfelt Creations Ornament die set were cut out. Gold embossing powder was also added to these leaves and they were attached with dimensionals over the edge of the label. The top corners were pierced and a pearl added to the center of each.

A glue pen was used to add glue to the word “NOEL” and green glitter added. Red pearls were added on the embossed berries around the holly leaves. The green embossed piece was layered on gold metallic card stock then attached to an ivory card.

You can see more projects completed by some of the other designers  on the Heartfelt Creations blog here.

what a beautiful card, almost gets me in the Christmas mood.

Wow this sentiment stamp is beautiful just on it's own. Added to the holly embossed background makes it a really stunning card Selma!

I agree wholeheartedly with Sue! A perfect Christmas card if there ever was one!

Lovely card, so elegant! Just love how you featured the sentiment.

such a beautiful card, great sentiment, and pretty holly...

Your card is gorgeous, Selma!

what an elegant Christmas card! I love everything about it!!!

Selma,
What an interesting idea to cut part of the eb folder to lay over. I'll have to remember that one. I love card as always.