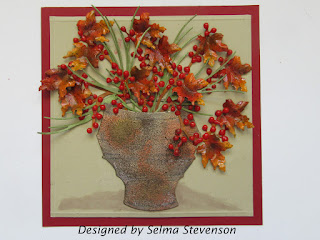 Today I was thinking outside the box with Susan's Garden Notes die sets.  I received an email from White Flower Farm showing a beautiful plant called Viburnum Trilobum Wentworth.  I thought it would be fun to try and duplicate that plant using Susan's die sets. 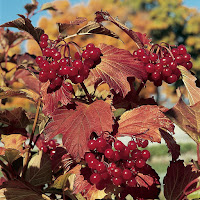 Susan's Woodland Leaves die set was used to die cut the leaves.  I tried to duplicate the colors shown in the picture.  I probably should have created more leaves, but I wanted to be sure the berries showed.  For this card I die cut, colored and shaped 12 leaves.  To bring out the color on the leaves, I brushed Nuvo Crystal Glaze over them.

The Garden Notes Trevi Urn die set was die cut for the container.  I experimented with different embossing powders to color this urn.  I think it looks better than it appears in the photo.

The urn was attached to the front of the card.  The Berry Spray was cut apart and the branches inserted in the urn.  The Woodland leaves were glued onto the berry branches, trying to replicate the branches in the picture.

I felt the urn needed something extra so I used the Impression Obsession Grass die 038J to create filler.  The grass was cut apart and glued behind the berry spray. 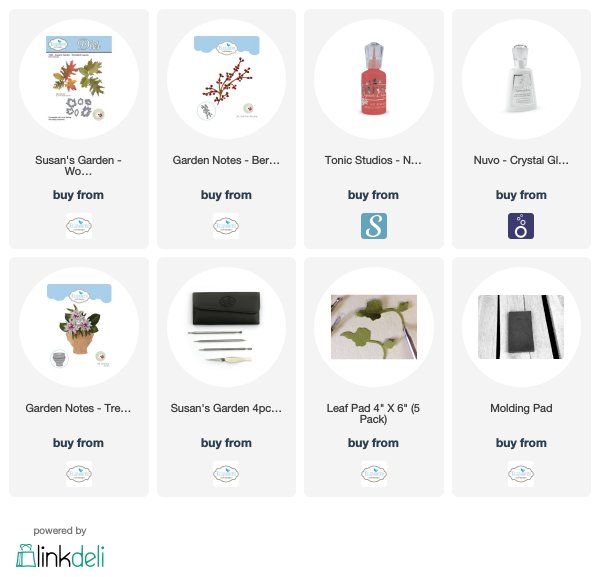 Wow Selma this is perfect !!! As with all of your creations...a masterpiece ❤️❤️ I think it’s perfectly replicated just wow - Dawn

Out side the box is always fun . sometime it works sometimes it is a challenge. This works. thanks.

Thanks for Fantasctic blog and its to much informatic which i never think ..Keep writing and grwoing your self