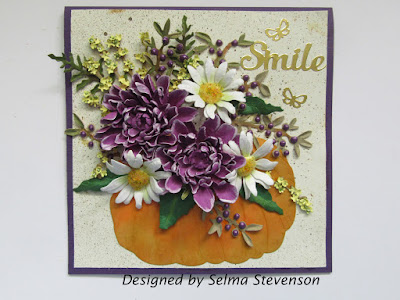 A bouquet showcased in a large pumpkin is so beautiful.  Today I created a card using a variety of the Susan's Garden Notes die sets.

This is a 6x6 inch card.  The base card is a dark purple.  On top is a slightly smaller ivory card stock that has been sprayed with Distress Oxide Vintage Photo Spray.

The Garden Notes French Pumpkin die set was used to die cut the pumpkin out of white card stock.  Different shades of orange and yellow inks were used to sponge on color.  The pumpkin was attach to the bottom of the card.  Dimensional foam tape was used in the center of the pumpkin and the edges glued down.

I created two dinner plate dahlias using the Garden Notes Dahlia 2 die set.  The petals were die cut using a pretty purple card stock.  The tips of each petal was colored white by swiping the tips along the edge a white pigment ink pad.  A heat tool was used to to dry the ink before shaping the petals.  The Flower Tool Kit was used to shape the petals.  Two layers of each size petals were used to create each flower.

The white flowers were created using the Garden Notes Shasta Daisy die set.   I created these flowers differently than the Shasta Daisy because I wanted a smaller flower.  Only the smallest petal die was used.  There are two layers to each flower.  The center was sponged using the light green PanPastel before shaping.  The two layers were glued together.  For the center of the daisy, a small circle was cut and cupped to fit in the center.  The edges were glued and attached in the center of the flower.  Yellow Pollen was added around the edges of this circle.  A mixture of orange, yellow, and a tiny bit of green pollen was added in the very center.

The Garden Notes Lavender die set was used to die cut one branch.  Instead of using purple for the little flowers, yellow card stock was used.  After shaping the flowers, they were glued to the stem.  I used Bottle Green Nuvo Crystal drops to drop one tiny dot in the center of most of the yellow flowers.

The Garden Notes Leafy Berry Branch die set was used to die cut two branches.  A marker was used to color the leaves and stems.  Nuvo Violet Galaxy Crystal Drops were used to create the berries.  These branches were cut a part to go behind the arrangement.

The Garden Notes Ladder Fern die set was used to die cut two ferns out of green card stock.  They are hard to see, but they are tucked in at the back of the arrangement.

All the die cut elements were arranged in the pumpkin.

Gold butterfly and sentiment stickers were used to complete the card.

This card can be mailed in one of the clear acrylic boxes, which are listed below. 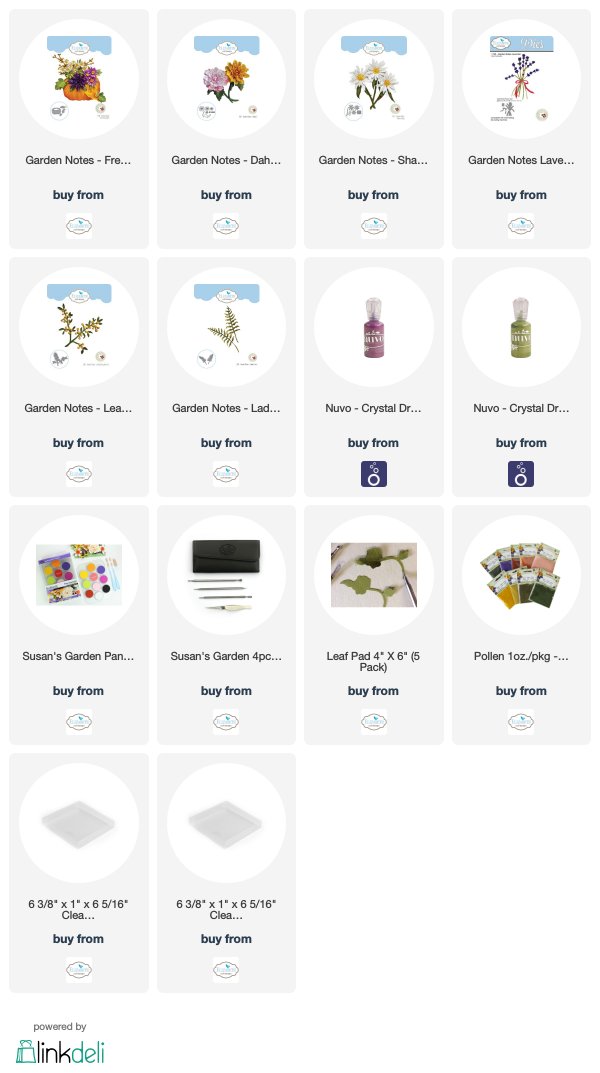 Flowers in a pumpkin- gorgeous!

That card would make anyone smile. I's so lovely. The flowers look so alive. I love the berries. You do such BEAUTIFUL work. I love your creations.

So lovely. Love the Fall theme.