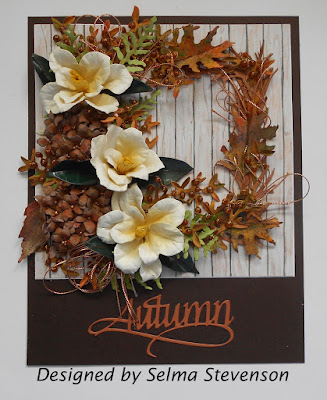 The weather has been very cool here and some  of the maple tree leaves have already changed color.  I decided to create an Autumn card that would look very pretty framed in a shadow box.

For the background I used a piece of wood-grain card stock.  It was attached to a larger piece of dark brown card stock.

At the bottom of the card is Suzanne Cannon's A Way With Words 4-Seasons Autumn die cut.

Susan's Square Grapevine Wreath die set was used to create a wreath for this arrangement.  There are two layers of the wreath.

The Garden Notes Ladder Fern die set was used to die cut 5 ferns.  They were shaped with the flower tool kit.

The Garden Notes Leafy Berry Branch die set was used to die cut 3 branches.  The branches were shaded with orange, red, and green Distress Oxide inks.  The leaves were shaped, then Nuvo Orange Soda Glitter Drops were used for the berries. 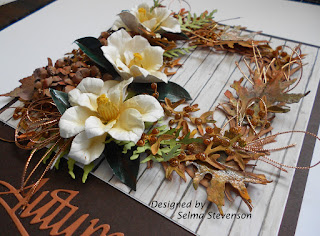 Garden Notes Hydrangea die set was used to create two hydrangea flowers.  I don't think hydrangeas come in brown/rust colors, but that is what I created for this card.  I used brown card stock and shaded the center of the flowers with a dark red PanPastel.  They were shaped and glued to the dome (from the die set) then a small Prill was added to the center.

The Garden Notes Southern Magnolia die set was used to create 3 magnolias.  You can watch Susan's YouTube video-Southern Magnolia at this Link for instructions on how to assemble this beautiful flower.   The leaves were die cut using dark green card stock.  Rusty Hinge Distress Oxide Ink was sponged on the back of the leaves.  Nuvo Crystal Clear Glaze was brushed on the top of the leaves to give them the shiny waxy appearance.

Susan's Woodland Leaves die set was used to die cut 4 of the larger leaves.  They were colored in Autumn colors, then shaped with the flower tool kit.

The Ladder Fern, Leafy Berry Branch, Hydrangeas and Magnolias were arranged on the left side of the square grapevine wreath.  On the right side of the wreath, a few small pieces of the leafy berry branch were tucked in plus the Autumn leaves

Thin Bronze cording was looped and tucked in around the wreath. 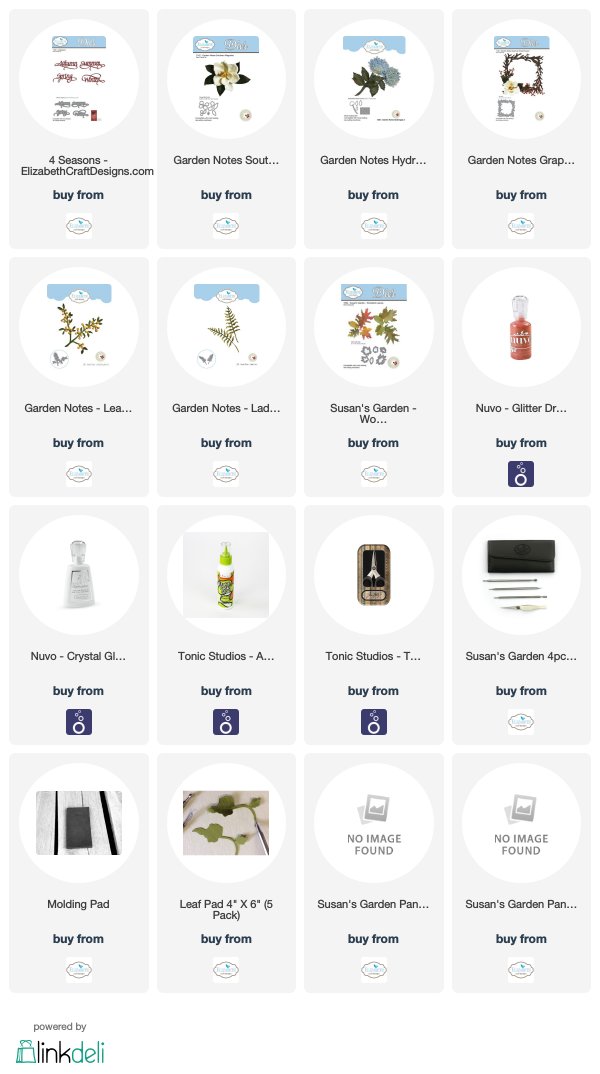 Good morning Selma,
Oh, how lovely is this card, it is just beautiful. I love the colours of autumn when it comes to the garden and surrounding countryside (well mines is surrounded by the countryside after the jail,lol). You bring the flora to life with your cutting, colouring and shaping, that to me is like stepping from my garden out into the woods. Thank you flower for sharing your stunning workmanship with us.
Crafty hugs
Norah (Glenochil Village, Scotland)

Way cool. Like a wreath and card in one.