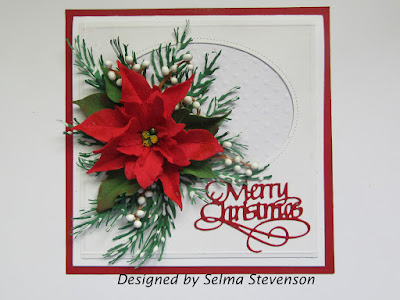 I have some red Foamiran that a dear friend in the Netherlands sent me and I decided to create a poinsettia with it using Susan Tierney-Cockburn's dies.

Suzanne Cannon's A Way With Words Merry Christmas die set was used for the sentiment.  It was die cut using red card stock and attached on the lower right side.

Susan's Poinsettia die set was used to create the poinsettia.  The red leaves were detailed using the leaf tool from her Flower Tool Kit.  The poinsettia was assembled using a hot glue gun.

To create the bracts for the poinsettia, Nuvo Bottle Green Crystal Drops were created on a craft mat.  While the drops were still wet, a very small amount of yellow pollen was pushed into the top of the green drop.  Once dry, the bracts were glued into the center of the poinsettia using tacky glue.

The Garden Notes Whitepine Bough die set was used to die cut a lot of pine branches.  I used the Tim Holtz scissors to cut some of the pine needles in half.  This makes the pine branch appear fuller.  For snow on the branches, Nuvo  Gloss Simply White Crystal Drops was spread across some of the pine needles then Nuvo Ice White Pure Sheen Glitter sprinkled on, for a snowy effect.

The Garden Notes Berry Spray was used to die cut 2 sprays.  The stems were colored brown and Nuvo Gloss Simply White Crystal Drops was used to create the berries.

The Poinsettia was attached to the left side of the die cut oval then the pine boughs and berry spray was attached under it.

This card can be mailed out in one of the clear acrylic boxes linked below.

Very pretty but was wishing for a video of how you made the flowers with the foamiran.

Nice Poinsettias. Not sure if I’m ready for Christmas, but it is getting close for projects as pretty as these.