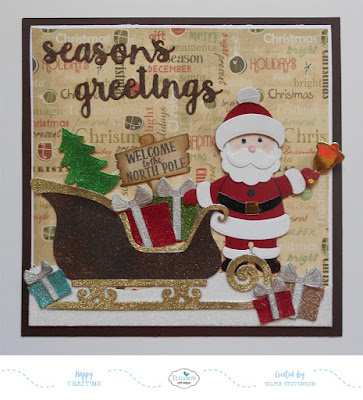 This month the theme for the design team is Christmas Fun with Character Dies.  The Elizabeth Craft Design team is challenged to make a Christmas card using the new Joset Designs Character dies that were released this month.  This card was designed using the Santa Clause die set as well as the new Santa's Sleigh die set.  You can view all the cards created by the design team on the Elizabeth Craft Design Blog at this LINK.

This is a 6-inch card.  A piece of the ModaScrap Christmas Vintage Collection design paper was used to cover the front of the card.  The Words 5 - Winter Wishes die set was used to die cut the sentiment out of brown card stock.

Use the Reindeer die set and die cut one snow bank.  Use a piece of white card stock that has Clear Double Sided Adhesive on top.  Sprinkle Cool Diamond Glitter to the adhesive and polish with your fingers.  Attach to the bottom of the card.

The tree and gifts/ribbons were die cut with Clear Double Sided Adhesive on top.  They were glittered using Silk Microfine Glitters.  The bows were attach to the gifts. The Santa die set was used for Santa.  He was assembled as shown on the die cut package. The bell was die cut using gold metallic card stock.  To add a belt, use Santa's white head band for the hat.  Die cut the band using shiny black card stock.   Cut it in half and trim off the ends to fit around Santa's waist.  Cut a piece of gold card stock for the little square buckle.  Use a black marker to draw a black square in the center of the buckle.  Attach to the front of the belt.

Attach Santa in front of the Sleigh as shown.  Attach the gifts and tree as shown.

Use the Igloo die set and die cut the sign.  Use the Cute Winter Sentiments stamp set and stamp "Welcome to the North Pole" on the sign.  Attach the sign in the Sleigh.

I hope the design team has given you a lot of Inspiration to start your Christmas cards.

You can shop for the products I used by clicking on the links below.

Super cute card! I love this one.

So vintage. Wonderful. However, I'm sorry I can't find your 2nd card. :(