Moose at the Lake 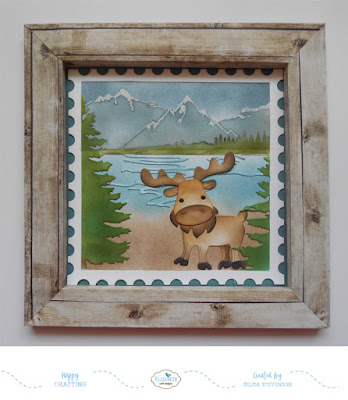 Where I live, we usually see at least one moose each year.  They are my favorite wildlife to see.  Joset has a cute moose in her new release at  Elizabeth Craft Designs and I couldn't resist creating a scene I might see close to home. To begin, a frame was created using the ModaScrap Wood Effect design paper and the Happy Frame XL frame set.  A piece of blue card stock was attached to the back of the frame. To create the  scene, the Lake Scene die set was used to die cut both the frame and scene, using Soft Finish White Cardstock.  The boat, ramp, and cattails were cut out of the design, using the small Elizabeth Craft Designs scissors.  Sponges were used to color all the elements of the design.  Before sponging on color, a strip of Post-It Note was pressed down around the edges of the frame to avoid getting ink on it.    A piece of white card stock, cut 6 inches square was used for a backing to the die cut scene.  Before attaching to the frame, dark blue was sponged on the top portion for the sky, a lighter blue sponged in the middle for the water in the lake, and brown sponged on the lower portion for the ground.  The die cut scene was glued to the colored backing. The Moose die set was used to die cut all the pieces, using White Soft Finish Cardstock.  Distress ink was sponged on each piece and then glued together, using Kids Choice Glue.  The moose was attached slightly behind the evergreen tree on the right.  The framed piece was then attached inside the Happy Frame.

This was a very fun project to complete.  A hanger will be attached to the back of this framed piece and will be hung in the bedroom I have decorated will moose items.

Links are provided below for the products used from Elizabeth Craft Designs. 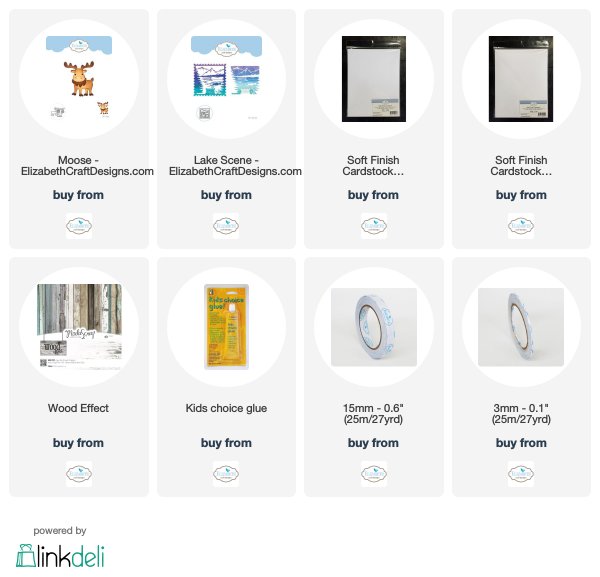 Cute card and I love the frame!

Hi, Did you make this frame using the XL and the small frame die? It looks like maybe you glued them together? And how did you get your frame lined up so nicely with the wood grain? Thank you!