I think it is so fun to be able to die cut images and create a scene with them.  There are so many possibilities according to how you decide to arrange them.   I posted a "Winter Village Scene" on my blog August 2, 2013 that many of you really liked and asked for a tutorial on how I created it.  Today I have created a similar card and have a tutorial below to show you how I did it.  First I will tell you about the products I used on this Winter Scene.  The design paper I used is from the Kaiser Kraft "Twig & Berry" 6 1/2" square paper pad.  The die cut house is one of the new Marianne Design houses (COL1327).  The die includes the house, the drifting show pieces you glue on, and a snowflake stamp.  The large tree on the left is the Memory Box "Magnificent Pine" tree. Isn't that a cool tree! The tree in front of it is the Marianne tree (LR0136).  There is also one on the right side of the card.  The deer, lamp post, and the small tree are die cut using the Marianne Design (COL 1330) die set.  I sponged Distress Inks on all the die cuts.  The color used on the trees is Bundled Sage Distress Ink - I love the soft green color on this card. The Sentiment is die cut using the Cheery Lynn "Merry Christmas Set".  I only used the word Christmas.  Green glitter was added to it.  The glitter added to the other pieces is the Ranger, Distress Stickles, Clear Rock Candy, dry glitter. 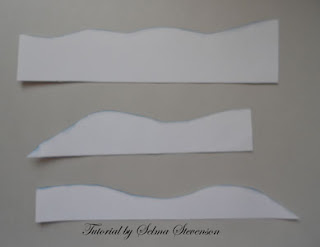 The card I created today does not show the snow banks as well as the card created on August 2nd, because of all the trees I added, but they are there and this is how I created the base to start adding the pieces to create the scene.  I started with three pieces of card stock wider than the width of the card and cut them as shown above.  The bottom layer is a smaller height than the second layer, and the top one is the largest. 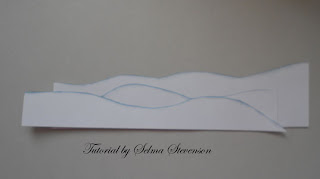 The reason I use strips that are wider than the card is so I can "play" with how I layer them.  I have sponged the top of each piece with "Weathered Wood" Distress Ink to help make them show up.  You can see how I moved them around alternating the "mounds of snow"  which made the ends very uneven.

Next I added adhesive only along the very bottom of each layer because I wanted the top open so I cut push the house, trees, etc. down in the snow if I wanted to.  This shows the back layer with the middle layer taped to it.

Here I have taped the front down.

Next I placed the snow bank over the bottom of the card and marked where they needed to be cut off with the paper trimmer. 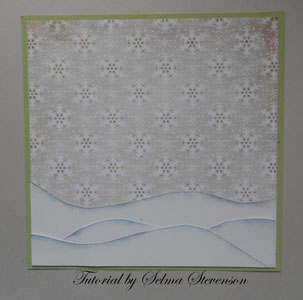 This is how it looked after the ends were trimmed off and the snowbank was attached to the card along the bottom and the sides.  I did not put adhesive along the top of the snow. 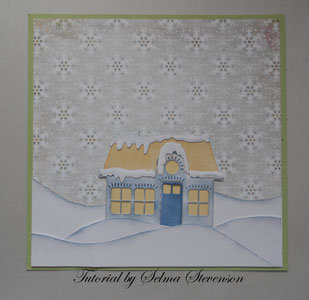 The first die cut piece added with the die cut house.  It is tucked down in the snow just a little. 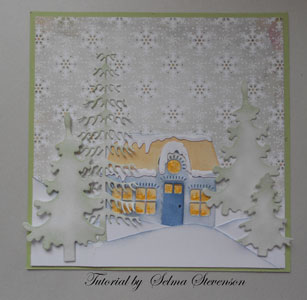 Next I started adding trees and tucked some of them down in the snow. 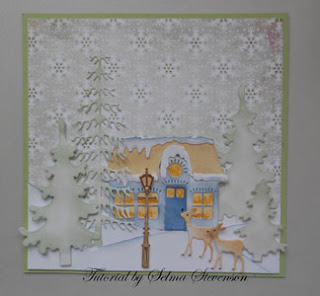 The next step was to add the deer and the lamp post.

I hope this helps you create your winter scene.  It is very easy and creates a lot of dimension to your snow scene.

gorgeous card and fantastic instructions!!! Thanks

Great tutorial and gorgeous card Selma! I know it will be helpful to everyone!!

I always associate you with beautiful flowers but you are so multi talented. This is a gorgeous winter card and I really appreciate the tutorial.

Selma- What a beautiful Winter scene!