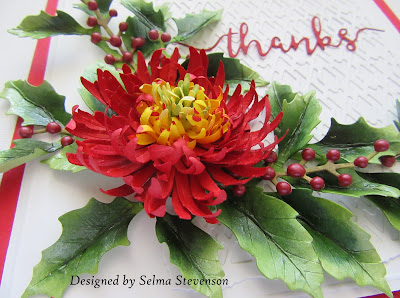 Susan has asked the design team to work with only three of the new Garden Club die sets until after her appearance on Create & Craft on October 29th, when she shows and demonstrates all 13 new die sets.  After the 29th, the  team will be posting cards we designed using all 13 die sets.

The Holly leaves were die cut using white card stock and colored with two shades of green ink.  The lines in the leaves were drawn with the leaf tool in the Flower Tool kit.  Once the ink was dry on the leaves,  Nuvo Crystal Glaze was brushed on with a small paint brush.

The Berry Branches were die cut using white card stock and colored with brown ink.  The berries were created using Nuvo Autumn Red Crystal Glaze.  The branches were cut apart to fit on the Holly. 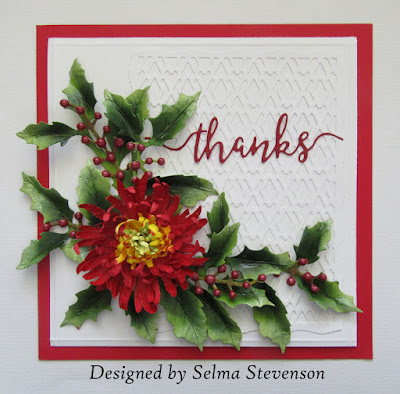 This is the card I designed using the Spider Mum and Holly.  The background was die cut using the Tonic Studio Patterned Panels-Deco Diamond die set.  This set has two dies and both were used.

All of Susan's Garden Club die sets will be available when Susan presents them on the Create & Craft Show October 29th.

I have added links to products below.  If you use these links to purchase products, I will receive a small commission which helps me purchase supplies -- no additional cost to you.  I appreciate you visiting my blog and appreciate your support.

Ohh how much I love your cards with flowers .I hope I can find the dies you use somewhere. Where do you buy them ? Do you have a favorite scrapbookingshop where you live or do you buy from any webshop ? Here in Sweden we don't have so many shops at least they are far from where I live. I used to go to a big show in London where my son lives, but now he works temporary in your town . That's why I ask you. Maybe I can send him a shoppinglist.
I know Tonicproducts from Londonshows so I can start looking for them on UK websites.
Hugs to you from Eva in Sweden

Oh girl! You are still the queen of flower making. I bow to your skills my friend! This is just stunning!

What a beautiful bouquet Selma—you’ve captured my memories of Spider Mums perfectly.