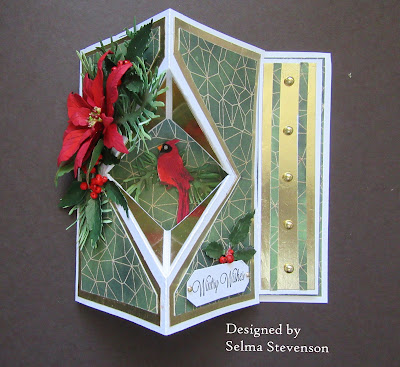 Good Morning Friends.   I have created a Faceted Vertical Easel Card decorated with Susan's Garden Poinsettia.  I found the instructions for this type card on Sam Calcott's YouTube Video.
I created the base card adding green design paper backed with mirror gold metallic cardstock.  On the video she added a piece of acetate for a popup sentiment.  I decided I wanted the faceted opening without this piece so you can see the bird, which is attached on the inside of the card.
The front of the card will open and become 3-D when pushed against the strip on the inside right side of the card.  This piece was decorated with large gold, flat backed embellishements. 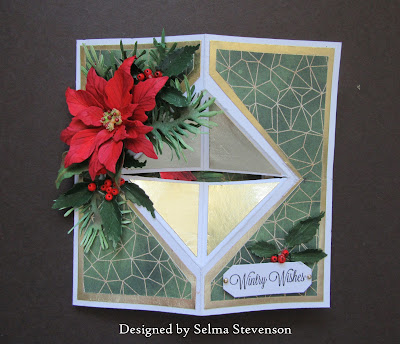 This is a picture of the card when it is closed.
Using Susan's Garden Poinsettia die set, one poinsettia was die cut using Susan's Specialty Cardstock.  The poinsettia was brushed with red ink.  I like to place the die cut pieces on the Waffle Flower Media Mat and brush on the ink.  The mat holds the die cut pieces in place, and makes it easy to quickly add brushed on color.  The poinsettia was shaped using Susan's Flower Tool Kit and assembled using Bearly Art Glue.  Nuvo Crystal Drops and a tiny bit of yellow Pollen was used for the center (Bracts) of the poinsettia.
The Winter Evergreen Foliage and Ladybug die set was used to die cut the evergreen branch.  The Winter Berry & Mistletoe die set was used to die cut the Winter Berry Branches.  Small styrofoam balls were painted red and used for the berries.  A black fine tip pen was used to press down on the end of each berry.
One of the stamps from Susan's Winter Garden Quotes stamp set was used for the sentiment.  It was gold embossed, cut in a strip, and the corners cut off.  Two small gold embellishments were added to each side.  It was attached with dimensional tap.  A piece of the Winter Berry was attached under the sentiment. 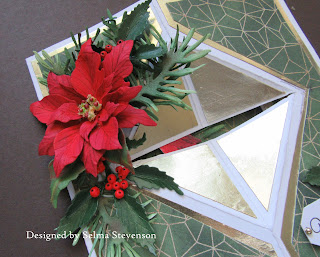 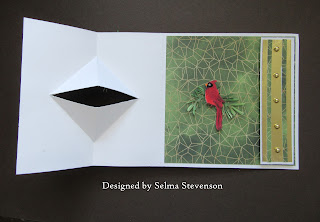