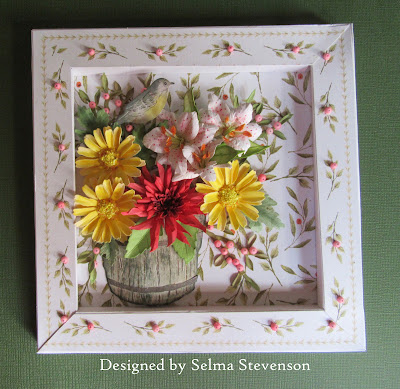 I am happy you came to visit my  blog today.  I have completed bouquets in Susan's Wooden Bucket for Spring and Autumn so today I created a Summer bouquet.
For something differrent, I created a frame for this card.  I used Susan's eight inch frame instructions, which are on her Susan's Garden Club FaceBook Video,  to create a frame using P13 Stitched With Love cardstock.  The frame was created using white cardstock and strips from the design cardstock cut and glued to the top of the frame.  Another piece of this cardstock was used for the background inside the frame.
The Geranium & Antique Wooden Bucket die set was used to die cut two buckets.  For this arrangement, I did not use the handle.  The two buckets were glued together.  The bucket was colored and another bucket die cut using a specialty brown cardstock and the metal bands were cut out and glued to the bucket.  The edges were sponged using a dark gray ink.  Two dimensionals were added to the center of the bucket and glue added around the sides and bottom then attached to the background. 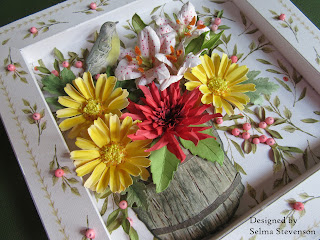 Susan's Cactus Dahlia die set was used to create one dahlia.  It was die cut using Susan's Specialty Cardstock, sponged and shaped with tools from her Flower Tool Kit.
The Button Chrysanthum & Daisy die set was used to create the yellow flowers.  Yellow Prills were added to the center of them.
The Oriental Lily die set was used to create the three lilies.  Yellow Pollen was glued to the ends of the stamens.
The leafy branch from the Winter Foliage die set was used to die cut 10 branches.  They were brushed green on the Waffle Flower Media Mat, then shaped using the tweezers in the Flower Tool Kit.  To match the berries in the design paper, I added pink styrofoam balls that were colored pink.  A fine tip pen was used to press down in the center of each berry, once the glue dried after they were attached to the branch.
The bird was die cut using Susan's Feathered Friends die set.  It was colored and attached using dimensional tape.
To complete the frame, I decided to add a berry to the leafy branches on the frame front.
I have one more season - a Winter Bouquet,  to complete in Susan's Antique  Wooden Bucket.