Have a Lovely Day 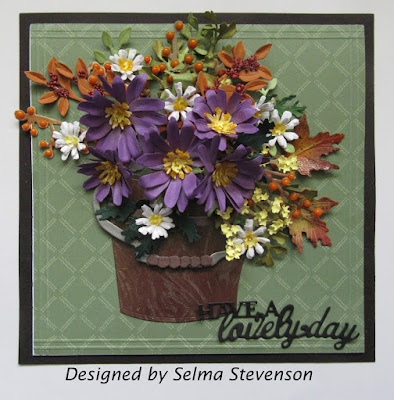 I hope you are having a lovely day.   Today I used a variety of Susan's die sets to create this floral arrangement in her Galvanized Bucket.

This is a 6x6 inch card.  The front was covered with a piece of design card stock from the Tonic Studio's Craft Kit 24.  The edges were scored, then attached to the card front.

The Garden Notes Lavender was die cut.  Yellow card stock was used for the yellow flowers on the Lavender branch.

The Leafy Branch die set was used to die cut leaves out of rust card stock and red Prills added for berries.

All the die cut pieces were arranged in the bucket and a die cut sentiment added.  This sentiment is from the Tonic Studio Craft Kit 21.

You can watch Susan's Garden Club Live videos on Facebook at this LINK for help on how to create her flowers.

This card can be mailed in one of the clear acrylic boxes linked below along with the other products used to create this card.

That's a lovely bouquet to go with a lovely day. Okay - definitely keep the LOVELY card and throw away the rainy day.