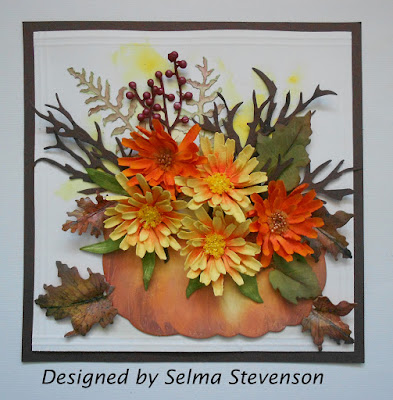 This is a 6-inch square brown card.  A white piece of card stock was cut 5 3/4 square and scored around the edges.  To add some color to the background, Nuvo Solar Flare Shimmer Powder was added.  This panel was attach to the front of  the card.

I wanted to try a technique Susan showed on her Susan's Garden Club Facebook Video at this LINK, where she die cut the Garden Notes Ladder Fern to create a stencil,  then used Nuvo Embellishment Mousse to fill in the fern on the card front.  I did not have Yupo paper like Susan, but I die cut the two ferns using a heavy weight card stock and used that for my stencil.  Susan used only Forest Green Embelishment Mousse, but I decided to give my fern a little additional color, and after filling the stencil with the Forest Green Mousse, I put some Cosmic Brown Embellishment Mousse on my craft mat and then used my finger to blend the brown mousse over the stem and over parts of the leaves.  I really like how this turned out.

The Garden Notes French Pumpkin die set was used to die cut the pumpkin out of white card stock.  Different shades of yellow, oranges and brown were sponged on to color it.  A square of Dimensional Foam Pad was added in the center for dimension, then Adhesive Tape Runner used around the sides and bottom to attach it to the card front.

Use the Garden Notes Calendula die set and create three yellow and two orange flowers.  The flowers were shaped using Susan's Flower Tool Kit.  Pollen and Prills were used to create the center of the flowers.  You can watch Susan's Garden Club Video at this LINK to see how to create the Calendula.

The Garden Notes Berry Spray die set was used to die cut one spray.  Nuvo Rhrubarb Crystal Drops were used for the berries.

The Garden Notes Oval Grapevine Wreath die set was used to die cut one wreath out of brown card stock.  The wreath was cut apart to create branches behind the flowers.  You can use any one of Susan's Grapevine wreaths for this.

The Garden Notes Woodland Leaves die set was used to die cut four leaves.  They were colored and then covered with Nuvo Crystal Clear Glaze.

This card can be mailed in a clear acrylic box.

I have added links to the products I used, below.  If you use these links to purchase products, I will receive a small commission.   I appreciate you visiting my blog and your support.