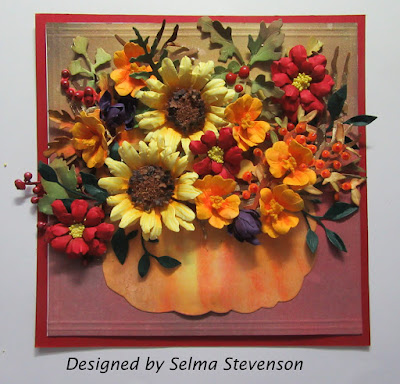 Many times when I create Susan's flowers, I make extra flowers and put them in a box for later use.  Today I went through that box and pulled out a bunch of flowers and leaves to make an arrangement in Susan's Garden Notes French Pumpkin.

First I created a background for the arrangement.  A variety of Distress Oxide Inks were sponged onto white card stock using reds, browns and orange on the bottom and yellow, green and brown on the top.  Once all the inks were added, the piece was sprayed with water to give it a distressed appearance.

The Garden Notes French Pumpkin was die cut and yellow and orange inks were sponged on.  It was attached to the bottom of the card using dimensional pads in the center and glue around the edges.

The Garden Notes flowers include:  Sunflower, Primrose, Zinnia, and purple buds which were die cuts from the Dahlia die set.  The Greenery includes Ladder Fern, Maidenhair Fern, Hawthorne Berries, Leafy Berry Branch, and pieces of the Grapevine wreath.  I also used a die cut leafy branch that is not part of the Garden Notes collection.

This card can be mailed out in one  of the clear acrylic boxes linked below.  The products used for this card are also linked below.

Fall is my favorite season and it looks like you are getting us ready! Lovely card!

My. This pumpkin is bursting with joy. Very beautiful!

My name is Mrs Aisha Usman, am a Citizen Of Singapore. Have you been looking for a loan? Do you need an urgent personal loan or business loan?contact Dr. Mark Thomas FOIRM Ronnie Finance Ltd he help me with a loan of $85,000 some days ago after been scammed of $8,000 from a woman claiming to been a loan lender but i thank God today that i got my loan worth $85,000.Feel free to contact the company for a genuine financial service. Email: markthomasfinanceltd@gmail.com