Jessica Fick, the Design Team Coordinator for GinaK Designs has issued a challenge to all of the past and present team CSS team members to make a Christmas card with one of these sketches.  Some designers may post cards using each design:

We know you're going to LOVE what everyone has designed for us tonight!


Tonight I have created two cards, one from each of the sketches. 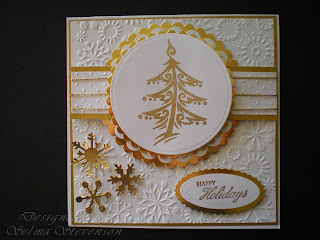 The GKD stamps I used for this first card are from the StampTV Kit "Holiday Cheer" and "Holiday Greetings"  I decided to make my first card using layers of gold and white.  The background was embossed with the Cuttlebug snowflake embossing folder.  The band across the middle was embossed with the Dotted Swiss folder.    Nestabilities were used for the circles and ovals.   This beautiful  tree and greeting are gold embossed using the super fine gold embossing powder from GKD.  This is by far my favorite embossing powder.  The middle band has three rows of gold cording.  The snowflakes were punched, pressed against  a VersaMark pad, then also gold embossed and attached with dimensionals. 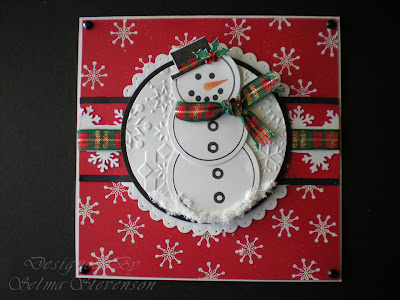 For the second sketch challenge I used two GKD stamp sets:  "Hip to Be Square" and "A Very Merry Christmas".
The background has white embossed snowflakes using a snowflake from "A Very Merry Christmas".  To create the snowman, I stamped the head, face and hat from "Hip to Be Square".  I wanted to build a body making each layer a different size so I used Nestabilities to cut out all three circles.  Before removing the bottom two, I used a marker to trace around the inside edge of the Nestie so it would look like I had stamped all three circles.  The buttons are also from this set.  The hat was cut out and a small piece of ribbon from GKD was cut for the band.  The holly is from "A Very Merry Christmas".  Small red rhinestones were added for the berries.   A piece of GKD ribbon was added for the scarf.  I folded a  small piece of ribbon in half and tied a knot leaving the ends long.  Did you notice I frayed the ends to look like fringe on the scarf?  I used glue dots to attach it.   Don't you think it looks like a real scarf!
The background circles were cut with Nestabilities. The top piece was embossed using the Cuttlebug snowflake embossing folder.  A paper piercer was used to punch holes in the bottom scallops. The band was created by matting red and black CS.  The snowflake border was created using a MS border punch and a piece of GKD ribbon is across the center of the band.   Polar White Flower Soft was added to the bottom of the snowman and  black rhinestones added in the corners to complete the card.
Would you like a chance to win a GKD stamp set? NinaB is going to pick a random commentator from one of the blog posts tonight but she won't tell us from which blog.  Be sure to leave comments on all the blogs for a chance to win a "Hip To Be Square" stamp set.
Now here are the links for everyone else participating in this blog hop:

and the links for all of the past CSS Design Team members participating:

Some of GinaK's Senior Design Team Members and Illustrators wanted to get in on the fun tonight too:

Don't forget to leave a comment for a chance to win "Hip To Be Square" stamp set to be given away by Nina Brackett.

These sketches are also our sketch challenge for this week, so be sure to check out all the information in the discussion in our Challenge group over on StampTV Thursday morning. We'd love to see your cards with the sketch too!

Oh Selma! You do it every time I visit your blog... you amaze me with your work! I LOVE your cards and am thrilled you're hopping with us tonight!!!

Selma...these are both gorgeou!!!! Great job!

wow! love that little snowman! how cute is that scarf...bet that was fun to do! love the white and gold! big sigh....love your cards!

Fabulo-so Selma! I love the elegance of the first one and the sweetness of the second!

These are just wonderful!

Fabulo-so Selma! I love the elegance of the first one and the sweetness of the second!

Selma, what gorgeous creations! You are always so creative! Thanks for being an inspiration!

Love them both Selma but like you I have a soft spot for snowmen!!!

Amazing use of white and gold. I love this card. Thanx for sharing.

Wow, way to rock the Cuttlebug embossing folders! And love the elegant cards. That gold and white combo - whew!

the white card is so stunning!! and the snowman is just too cute!

I love that gold and white, so beautiful and I also love the snowman one, extremely cute. Love your versatility.

Love all the detail you put into your cards. They are lovely.

Wonderful cards, Selma! The white and gold combo is so elegant and that snowman is adorable!

Love these cards! The gold and white is so elegant. As aleways great ideas.

so gorgeous Selma! Love all the embossing you have done on that first one and nice tip with the snowman!

Fantastic Selma...I love both cards. The embossed snowflakes add such great texture to this card, and the ribbon scarf on your snowman is just adorable. Awesome job.

The Other Patti Sue said...

Both cards are wonderful! Lovin the first one with it's pretty elegant feel!

All your cards are just wonderful!!

These are both fantastic! I love the white and gold one especially! So very elegant and absolutely beautiful!

In a sea of beautiful cards these are truly outstanding! The gold with the white embossed snowflakes is jaw dropping!

Great cards!! Love the White and Gold together!!

Love these Selma! Your first card is so elegant and your second one with the snowman is so jolly, love the scarf! I really need to get that set soon...Fabulous designs and love the detail you put into your cards.

I love the gold and white colors. And the snowman in the second card is so cute. Like how you cut out the circles of him.

Selma, you are sooooo talented! These are gorgeous. Huge congrats on your big news from the other day!

Awesome! I LOOOOOVE the gold one!!

Both your cards are beautiful. I like this layout scheme. TFS

The gold and white card is so striking and elegant - great job! The snowman is a cutie too!

Selma, Wow! Your cards are amazing as always! I love the colors you chose for both cards...beautiful, my friend!

Selma, your cards are so pretty!! Love your colors and what beautiful embellishing!!

JUST wonderful!!!! I have to say the white and gold card with the gold snowflakes is out of this world gorgeous!!!

Hi selma! :) wow....just beautiful! so elegant and the snowman is so fun! great job as always girl! :)

Both of these are FABULOUS Selma - love the white and gold - SO elegant and your snow man is very clever - like you :-)

Gorgeous cards Selma! I love the white and gold together and that snowman is so cute!

Both cards are great!

Gorgeous cards, Selma! Love the gold and white combo with all of that gorgeous embossing on the first! The second card is too stinkin' cute! Love the plaid scarf on the snowman! :)

beautiful and soo cute! Two great cards...love them both!

Hi Selma! That gold and white is gorgeous!! I love the snow you added!

Great cards! The gold one is so classy and the snowman card is so adorable!

Both cards are just terrific.

Oh my, I love them both! The first card is so elegant with the gold and white and dry embossing, and the second is so cheerful and fun with the bright colors. A wonderful contrast!

Such adorable cards Selma! Wonderful take on the sketch!

An Leaked Lady GaGa Song was Unwrapped this morning with no traces of where it came from.
Some say that it was discovered in GaGa's Record Label's headquarters.