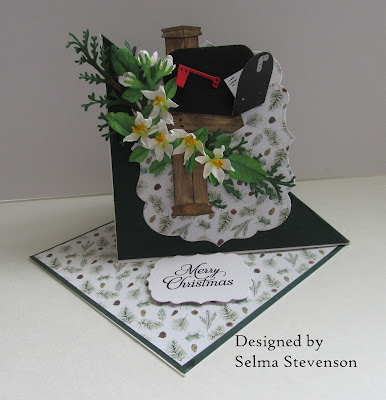 Good Morning. December really bright in winter at our house.  We just has 18 inches of new snow.  It does look a lot like Christmas outside.   Today I have a Twisted Easel Card designed using Susan's Garden Letterbox and Jasmine die sets.
This is a 6x6 inch card.  To create the Twisted Easel, the top panel is scored in half from upper left corner to bottom right corner.  A label die was used to attach to the lower half.  Another piece of design paper was die cut and glued over the label die cut.  There is a raised sentiment on the inside of the card to help hold the decorated portion of the card up.
The letterbox die set was used to die cut the letterbox and the pole.  The letterbox was die cut using black pearlized card stock and the pole die cut using a wood grain cardstock.  The pole was attached using dimensional tape.
The Jasmine die set was used to die cut the jasmine.  It was die cut using Susan's Specialty cardstock.  The flowers and leaves were shaped using tools from Susan's Flower Tool Kit and Kids Choice Glue used to assemble them.  I store some of the glue in the Sili Glue Pod to store the glue.
The Ferns & Ivy die set was used to die cut the ferns.
The same design paper was used on the inside of the card.   One of the stamps from Susan's Winter Garden stamp set was used for the sentiment.  It was stamped using VersaFine black ink and die cut with a small label die.  It was attached with dimensional tape so it would be raised to hold the bottom of the top of the card when folded back to form the twisted easel.
This is a very easy fun fold that shows off the decorated panel.  The card folds flat and is mailed in an acrylic box.