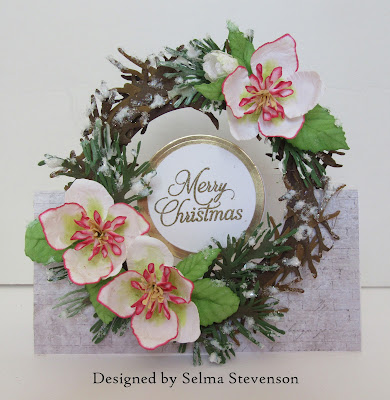 I have had a short vacation and am back with a floral wreath card designed using Susan's Christmas Rose, White Pine, and Wreath die sets.
For the inspiration for this card style, I watched Sam Calcott's YouTube Beautiful Floral Wreath YouTube Video.
For the card base, I used a piece of 6x6 inch card stock and scored at 3 inches and folded it in half.  I also found a piece of design paper that I wanted to cover the base with, so cut an identical piece of design paper and glued to the white card base.
I wanted to decorate Susan's Wreath die cut, so I die cut four wreaths using her Holiday Flora Collection Woodland Wreath and Feathered Friends die set.  I then found two circle dies that I could fit behind the die cut wreaths to create a sturdy frame for the base.  Three brown circle frames were die cut.  Two of the circles were glued to the front of the card base, then three die cut wreaths glued to the circle.  On the back of this wreath, (back of card) I glued on one brown circle frame and one die cut wreath so the back of the card looked finished. 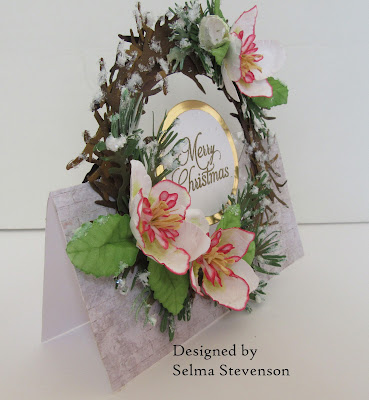 As you can see in this picture, there is a 3 inch base.  Since I used both a piece of white card stock and glued on a piece of design paper, this base is sturdy enough to stand up without spreading out.
Using Susan's Winter Evergreen Foliage die set, several White Pine Boughs were die cut, colored and shaped.  They were cut apart so they could be glued around the wreath, leaving part of the brown wreath showing.
I found a picture of a very pretty Helleborus (Christmas Rose) and tried to duplicate it for this card.  I didn't do a perfect job, but it is similar.  I used the smallest petals in this die set and colored the edges of the petals.  They look more red than they really are.  I used the tweezers in the Flower Tool Kit and rolled each petal.  I used three layers of the small petals.  I probably should have used four for each flower to make it even fuller.  The flowers were die cut using the Helleborus die set and Susan's Specialty Card stock.  PanPastels were used to color the base of the petals yellow green.  One bud was created using three layers of the smallest petals. 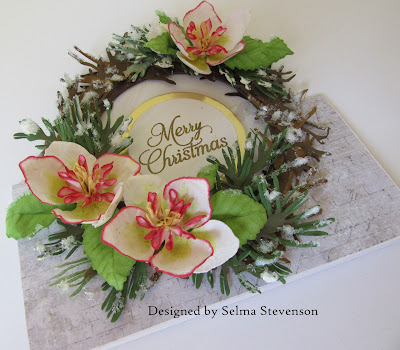 The flowers were attached over the White Pine Boughs and leaves tucked under the flowers.
Susan's Winter Garden Stamp Set was used to gold emboss the sentiment on white card stock.  It was die cut using a small circle die and a slightly larger circle die used to die cut a slightly larger gold mirror card stock circle.  They were glued together.  The sentiment is floating in the middle of the wreath.  A piece of clear acetate was cut about an inch wide and glued across the middle of the wreath.  The sentiment circle was attached to the acetate with a piece of double sided tape.
To finish the card, snow was added to the branches and crystal Twinklets glitter sprinkled over the wet snow.
This was a very easy card to create and I love how it shows off Susan's pretty die cut wreath.