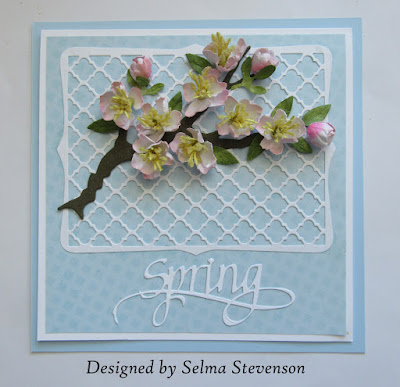 I am so tired of snow so wanted to think about Spring.  Today I created my card using Susan's Flowering Trees of Spring die set.

The branch was die cut using brown card stock.  Cut two branches and glue them together for strength.

The flower petals were die cut using white card stock to create 8 flowers and 3 buds.  Leaves were also die cut using white card stock.  Light pink ink was sponged lightly around the tips of the flower petals. The two die cut petal pieces were glued together to form the flower.   The stamens were die cut with yellow card stock and a light green marker  used to color the base.  The stamen pieces were cut down the center of each stamen to make them thinner.  A small dot of ink was added to the tips and then dipped into Susan's Yellow Pollen.  The stamen was then rolled and glued into the center of the flower.  The tree buds were created by using the two die pieces for the flower.  The petals were lightly sponged with light pink ink.  On the outside of the three petal die cut, a bright pink ink was sponged at the base.  A small pearl was used to create the round shape of the bud.  First the two petal die cut was hot glued around the bead, then the three petal die cut, with the bright pink inked side on the outside, was glued around the two petal die cut.  Pinch the petals close together to form the bud.  The leaves were detailed with the leaf tool, sponged with green ink, then shaped.

The background on this card is a piece of design paper from the Tonic Studios Craft Perfect Blue Blossom 6x6 pad.  The Tonic Classic Quatrefoil die was die cut using white card stock and attached to the top portion of the card.

Suzanne Cannon's A Way With Words 4-Seasons die set was used to die cut the Sentiment.