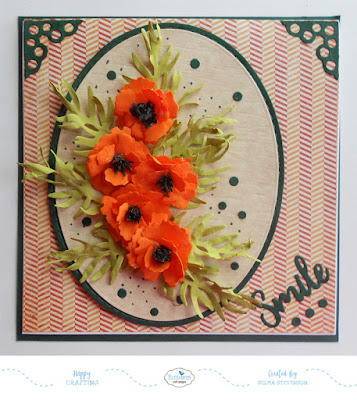 I wanted to see if I could create these poppies using orange Formiran.  Five poppies were die cut.  The base of the petals were sponged with a dark orange and a little black PanPastel.

Behind the Poppies, I used a piece of Formiran and the ModaScrap Leaves 1 die set.  Eight Leaves were die cut, shaped and attached behind the Poppies for a fuller background.

Two Ovals were die cut - one Stitched Oval and one Fitted Oval.  The Fitted Oval is slightly smaller.  They were glued together and attached to the card front using dimensional tape.

Use the Els van de Burgt Studio Corners 1 die set and die cut two corners for the top of the card.  Save the little dots that you punch out of the corners for use around the Poppy arrangement.

Once the Leaf 1 die cuts were attached to the left side of the oval frame, the Poppies were attached.  For a "filler" around the arrangement, glue the dots from the die cut Corners around as shown.  Use a small marker and add some small dots around the leaves.  Save three dots to glue under the sentiment.

Use the Els van de Burgt Studio "Smile" die set for the sentiment.  Attach it to the lower right corner.  Glue three of the dots (from the Corner die cuts) under the sentiment.

The Elizabeth Craft products used are linked below. 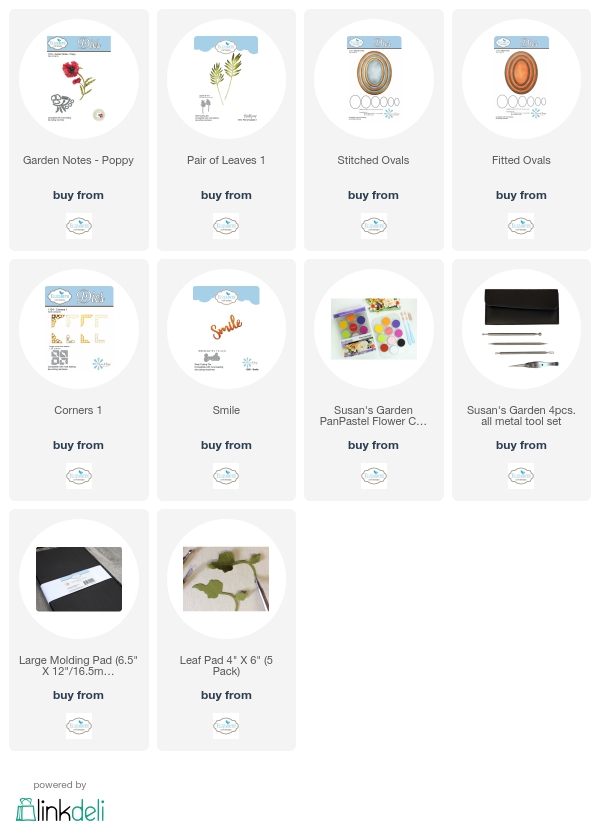 Gorgeous flowers!
Make a lovely focal point on your card :))

Yesterday, I ordered the foamaria from the place you recommended and anxious to follow your instructions and coloring of the flowers. Hugs from Grangeville, Idaho and will be around Deer Park in August for my son's wedding.

Selma, your Foamiran Poppies are GORGEOUS!!
I love them!! Eva.