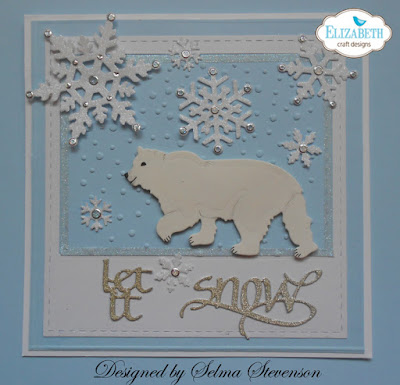 A lot of us have already received the first snowfall.  I don't like to drive in the snow, but the countryside is always so beautiful when covered with snow.

Today I wanted to use the Els van de Burgt Studio Snowflake dies to create a wintery scene, along with the A Way With Words Let It Snow die set.

When going through Susan's CountryScapes Critter die sets, I thought this polar bear would be the most likely critter to really love the snow.

To create a frame, I used the Els van de Burgt Studio largest Stitched Square die set and die cut a white square.  I wanted to cut a "window" in the top portion of this square, so I used the third largest Stitched Rectangle die set to die cut it. I used a rectangle die so that there would be a solid space at the bottom to add the sentiment.  Using the same Stitched Rectangle  die, a light blue rectangle was die cut.  It was embossed with a dot embossing folder.  To put some glitter around the blue rectangle, I used the 3mm Clear Double Sided Adhesive around the outside edge.  Cool Diamond Silk Microfine Glitter was added to the tape.  By die cutting the rectangle in the white Stitched Square Frame, I could attached the Stitched Rectangle inside the open area to achieve a flat background.

Using the CountryScapes Critters 4 die set, the bear was die cut using a light ivory colored cardstock.  I wanted him to be a slightly different color than the snowflakes.  Using a fine line marker, the nose, mouth, eye, and toe nails were drawn in.  Using a sharp lead pencil, fine lines were drawn into the scored areas of the die cut to help them show up.

Using white card stock with Clear Double Sided Adhesive on one side, the snowflakes were die cut and glittered with Cool Diamond Silk Microfine Glitter.

The A Way With Words - Let It Snow was die cut using a piece of white card stock that had Clear Double Sided Adhesive attached to the top.  Light Brass Silk Microfine Glitter was added. 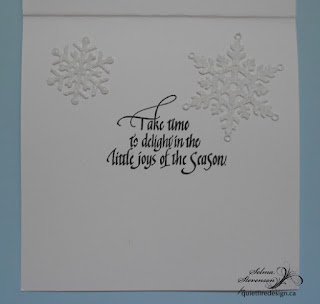 To complete the inside of the card, two glittered snowflakes were added.  Instead of getting all stressed out during the holiday, I always like to take time to delight in the little joys of the Season.  Quietfire Creations had the perfect stamp to relay this message.

You can create this card with the following products:

Such a beautiful card you have created. Loving those snowflakes!

The way you made the snowflakes sparkle is fantastic! The bear is a perfect addition!