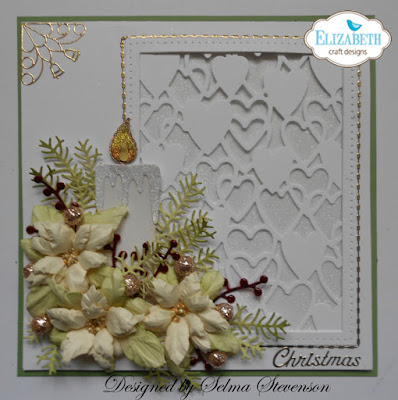 Good Morning Friends.  Today I wanted to use one of the new Els van de Burgt Studio Background dies to create a Christmas card.  I chose the Heart Background.

This is a 6x6 inch card.  To do something different, I used the Els van de Burgt Studio Second largest Stitched Rectangle die to die cut an opening on the left side of the card front.  (My card measures 12" x 6" and is scored down the center to create a 6x6 inch card.  The opening is die cut into the front panel of this card.)

The Heart Background was die cut using white card stock.  It was glued to the back of the die cut opening.  Using the second largest Stitched Rectangle and the third largest Stitched Rectangle, which were taped to a piece of white card stock,  a narrow frame was die cut to go around the opening over the Heart Background - on the front of the card.  This finished off the edges nicely.  Gold Peel Off Sticker Lines were added around this narrow frame to help it stand out.

Using a piece of white card stock that was covered in Clear Double Sided Adhesive, I used the largest Stitched Rectangle to die cut another rectangle that will fit behind the Heart Background.  The die was placed on top of the adhesive covering, die cut, then covered with Warm Diamond Silk Microfine Glitter.  It was attached over the back of the die cut opening for the Heart Background.  Can you see the glitter behind the hearts?

In the Candle die set, there is also a die for the pine branches.  Nine branches were die cut, using white card stock, and sponged with Peeled Paint Distress Ink.

The card was assembled as shown.  I had a few gold Christmas glitter balls that I attached around the flowers.  (These were on a Christmas Pick available at the craft store.)

To finish the card, a Gold Peel Off Sticker Corner was added, and a Gold Christmas Peel Off Sticker added to the lower right corner.  On the same sheet as the Christmas sticker were little bells.  These were added hanging down from the corner sticker.  There is a left over piece from the Gold Corner Peel Off Sticker that resembled a flame.  This was placed in the center of the glittered flame on the candle.

I hope you enjoyed my project.  The following products can be purchased to create this card from Elizabeth Craft Designs:

Selma - You have been blessed with a wonderful talent. Your cards are always so exciting and this one is exactly that - breathtakingly exciting. Thank you for your inspiration.

Beautiful card, and anyone would be thrilled to receive it!

Selma, I love....I love.....I love this Christmas card!!
Such an Elegant and Stylish Beauty!!
Your Poinsettia's are great, such always!!
Thanks for this Treat for my eyes.
Hugs, Eva.