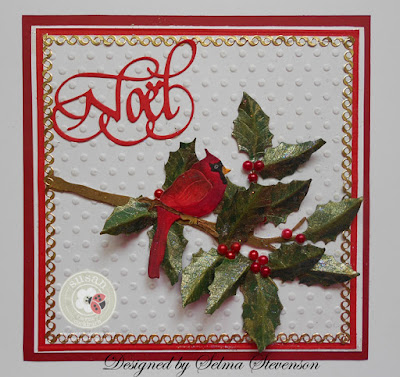 I have never personally seen a red Cardinal but I love to create Christmas cards with them.  Susan has a new die set, Garden Notes - Garden Birds 1 in her new release at Elizabeth Craft Designs. There are two birds in this set. Isn't this cardinal beautiful!  Also, I have used Suzanne's new A Way With Words Noel die cut which will be available very soon. Suzanne's A Way With Words dies really help create gorgeous cards.

This is a 6x6 inch card.  The Cardinal was die cut using white card stock and colored with a combination of red inks then Susan's black PanPastel was sponged lightly over the bird to give it depth of color.

For the Holly Branch, I used Susan's CountryScapes The Woods 1 die set to die cut the tree.  One smaller side of the tree was cut off and the larger side used for the holly branch.  Two trees were die cut using white card stock then colored with brown markers and glued together, for strength.  The Holly was die cut using the Garden Notes Holiday Holly & Berries die set.  The leaves were colored then Viva Inka Gold paste rubbed over them.  Red flat backed pearls were used for the berries.

The new A Way With Words Noel was die cut using red card stock.  Around the edges of the card Gold Peel Off Line Stickers were added.

Such a festive Christmas creation. Loving the holly branch. This will also be perfect for one entry as an anything goes creation for our challenge below.
Hugs
Desíre
{ATG with a CREATE WITH TLC Element}
{Doing Life – my personal blog}

Ooh Selma, both your cards are GORGEOUS, but I love the card with the Cardinal and Holly!!
Breathtaking beautiful.......a Master piece again!!
Hugs, Eva.

A beautiful card, Selma!!! The coloring of the bird is fabulous!!!