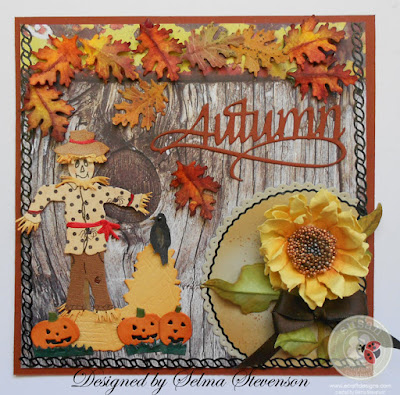 Autumn will be here soon.  We have huge fields of sunflowers growing not far from my house, and that is where my inspiration came from for this card.  Sunflowers remind me that Autumn is not far away, so I wanted to use the A Way With Words 4-Seasons Autumn die cut.  After creating the sunflower, using Susan's Garden Notes Sunflower dies, I decided to see what other items I could add to the card to complete an Autumn scene.

This is a 6x6 inch card.  For the background, I used a piece of Els van de Burgt, Through The Lens-Wood cardstock.  In the lower right corner, I used one of the Dotted Scallop Circles for a frame for the sunflower. Before taking the circle out of the die, it was sponged lightly with Really Rust Distress Ink.  A black Line Peel Off Sticker was attached around the circle to help make it stand out.  Once the circle was completed, it was glued to the outside corner, with the right side and lower edge hanging over the side of the card; it was trimmed off, with scissors, so only about 3/4 of it was on the card. 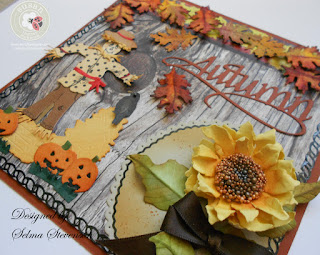 Once the Garden Notes Sunflower was created, I decided to use a mixture of Prills for the center of the flower.  The leaves were colored by sponging on Distress Inks.

It is fun to build the Scarecrow using whatever scrapes of cardstock and/or design paper you have.  After the scarecrow was built and all the other pieces die cut, the card was assembled.  Black Peel Off Line Stickers were used around the edge of the card.

The following products can be purchased from Elizabeth Craft Designs.

We all need some great ideas for fall cards, and this one is a beauty! Thanks so much for the inspiration.