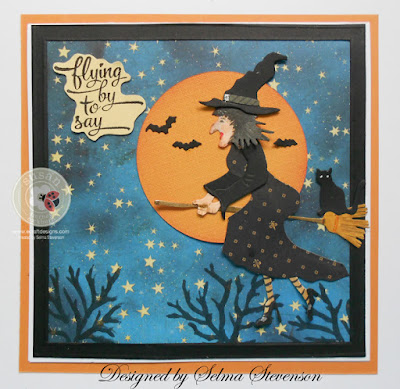 Halloween is not far off!  Susan's new CountryScapes Build A Witch die set is so fun to create cards for this holiday.  I also used Susan's new Shade Trees Stencil for the trees below the witch.  The new products are shown in the Coming Soon Section at Elizabeth Craft Designs.

My card base is 6x6 inches.  A piece of Graphic 45 design paper was cut slightly smaller and attached to the card front.  A black frame was cut and glued over the edges.

There are so many fun ways to create your Witch.  Choose all black for her dress or your favorite design paper with a design.  I used a piece of Graphic 45 design paper for her dress.  I die cut the hat, the dress sleeves, and the legs using black card stock.  I cut the shoes off the black legs.

The face, hands, and legs were die cut using white card stock.  These pieces were colored using a Copic E95 (Flesh Pink) marker.  On the face die cut, the hair was colored black.  The eyes and lips were drawn in with a fine line marker.  On the legs, a marker was used to create stripped stockings, then the shoes, that were die cut using black card stock, were glued on.  For the hat, I die cut it a second time, using dark gray card stock and cut out the hat band and used a black marker to draw on the strips.  A Silver Marker was used to draw in a buckle on both the hat and on the shoes.

To create the scene, I used Susan's new Shade Tree Stencil to color in the trees the witch is flying over, right onto the design paper.  I used a black marker to fill in the stencil opening so I achieved a nice dark black image.

The die cut pieces were then attached over the background, above the trees.  The sentiment is one of the stamps in Karen Burniston's What's Up Clear Stamp set.  It was stamped on a light yellow card stock and trimmed with scissors.  On the inside of the card you can stamp Happy Halloween or write your own message.

I am sure you will have a lot of fun creating many different Halloween cards using this cute CountryScapes Build A Witch!

Wow Selma.....I am excited.....I love the Witch!!! hehehe
You have made a great Halloween scene.....and the black cat makes the wonderful scene completely.
Thanks for the good and clear Step by Step!!
Hugs, Eva.

Selma- This is a wonderful card for Halloween!

One can never have too much Halloween!! LOVE this witch die set! Thanks for showing it to us on this delightfully Boo-tiful card!