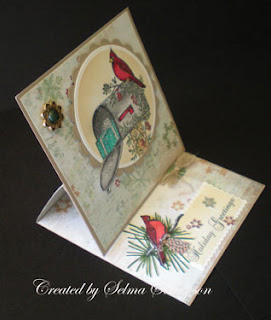 I have had so many emails about how much everyone loves the cardinal projects I have been posting, so today I am posting another one of my Heartfelt Creations design team projects.   To create this easel card I used Kraft card stock for the frame. The "Cardinal Holiday Mailbox" image was stamped and colored using colored pencils and OMS. I cut around the lid of the mailbox then used a circle Nestability to cut out the image. It was sponged with Distressed Ink prior to taking it out of the die. A scalloped background was cut out using Kraft card stock. Glitter was added to the image.
For the bottom of the easel, the greeting from "Cardinal Holiday Mailbox was stamped then cut out with a long rectangle Nestability. It was sponged prior to taking it out of the die. The greeting was placed near the bottom of the cut out so I could add one of the cardinals from the Cardinal Pine Cone Border set. I stamped the border then just used the cardinal on the left end. I cut around the image and attached it partially over the greeting. A matching cardinal from the "Cardinal Family Precut set" was stamped, colored and cut out with the matching die. It was attached with dimensionals. Glitter was added to give it some sparkle. A few little snowflakes were cut out of the design paper and added on the greeting piece. A button was attached on the line where I wanted to place the top when opened. A bow, made out of natural fiber, was created and added over the button. A decorative button was added to the top of the card. I really LOVE both these stamp sets.
You can see all the projects the design team created this week here.
Products used on this project:  HCPC 3349 Cardinal Holiday Mailbox Precut set; HCPC 3348 Cardinal Pine Cone Border Precut Set; HCPC 3353 Cardinal Family Precut Set; HCD 706 Cardinal Family Die
Tomorrow I will be posting a fun card I made for the Joan's Gardens Challenge.  Hope you will visit again in the morning.

Selma
This is an absolutely gorgeous card. Just love the cardinal.
The easel card always makes me want to do it but I never get to it. Awe well one of these days.
With inspiration like your blog it will happen.
Myrna

Beautiful card! So peaceful and serene...fabulous choice of colours and papers!

This is gorgeous! those images pair well together and I love the warm cozy feel of the card.

Those Heartfelt stamps are so much fun to use and I really like what you have done here.

Hi I just LOVE your Holiday Greeting Cardinal Mailbox! We would love to make it but my question is this.... How did you not cut off the mailbox when you cut out the circle around the image?
Thanks so much Loved your site.... had so much fun looking tonight we just found it and WOW is all I can say! Thanks for sharing