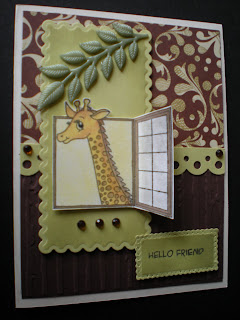 This was a really a fun card to make. I just received a new set I ordered from GinaK today called "Whatever Floats Your Boat!" by Rupa Shevde. The background was made with a piece of designer paper from Me & My Big Ideas and a piece of Chocolate Chip cardstock run through the Cuttlebug Distressed Strips embossing folder. I used a Martha Stewart punch for the border band. The two frames were cut using Nestabilities long rectangles. The cardstock is River Rock sponged with same ink before taking out of die. I used Koh-i-noor pencils and OMS to color the giraffe. To make the window look like glass, I lightly colored it with gray chalk then added VersaMark and clear embossed. I scored down the window using my Scor Pal and lifted it slightly. I have had the leaves in my "stash" for many years and decided they would look good on this card. I added some rust colored gems under the gariffe and on ends of band.

Got into your stash for this one Huh? Can't save those goodies forever, we need to use them. You did a great job on this card, the giraffe is so darn cute.