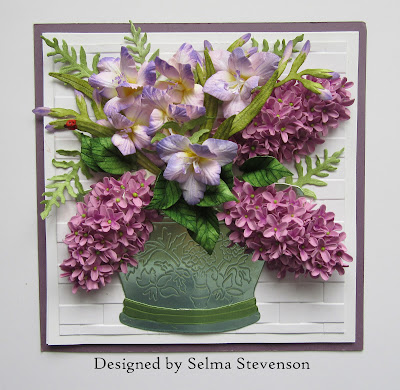 Good Morning.  Today I designed my card using Susan's new Lilac and Freesia die sets from Spellbinders.
For the background, I used the Lisa Horton 3D Weave embossing folder.
For the vase, I used Susan's Cactus Dahlia/Pottery die set.  It was die cut using mirror cardstock.  For the trim along the bottom, I used a little different color green mirror card stock to die cut the vase, then fussy cut out the two bands along the bottom of the vase and attached with glue.
Using the Lilac die set, three lilacs were die cut using Susan's Specialty white card stock.  They were colored using purple ink, shaped using Susan's Flower Tool Kit and assembled using Bearly Art Glue.  A green Prill was added to the center of each little flower.
Using the new Freesia die set, six flowers were die cut.  Light purple ink was sponged around the edge of all the petals then a slightly darker purple ink sponged just along the very edge.  Two flower stems were die cut and purple buds added to the top buds on the stems.
The Ivy & Ferns die set was used to die cut the ferns and the Foliage & Ladybug die set was used to die cut the Ladybug.  She was colored red with a marker, black details added using a microfine marker and crystal clear glaze added.