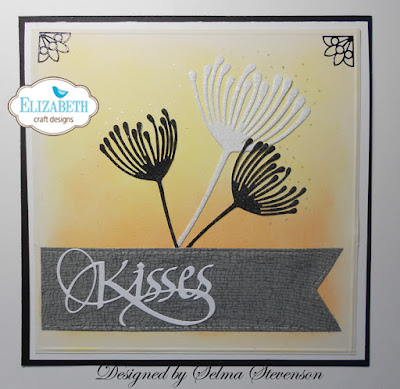 Today I have used the Elizabeth Craft Designs ModaScrap Dandelion Fluff die set to create this quick and easy card.

This is a 6-inch card.    The Dandelion Fluff  die set was used to die cut one white and two black images.  Yellow and orange Distress Inks were sponged on a white background and the Dandelion Fluffs were glued down.

The Stitched Fishtail Banners die set was used to die cut a banner for the Kisses sentiment which was die cut using the A Way With Words Sending Hugs, Kisses die set.

Two gold Peel Off Sticker Corners were added to complete the card.

The products used are linked below.

InLinkz.com
Posted by Selma at 9:40 AM