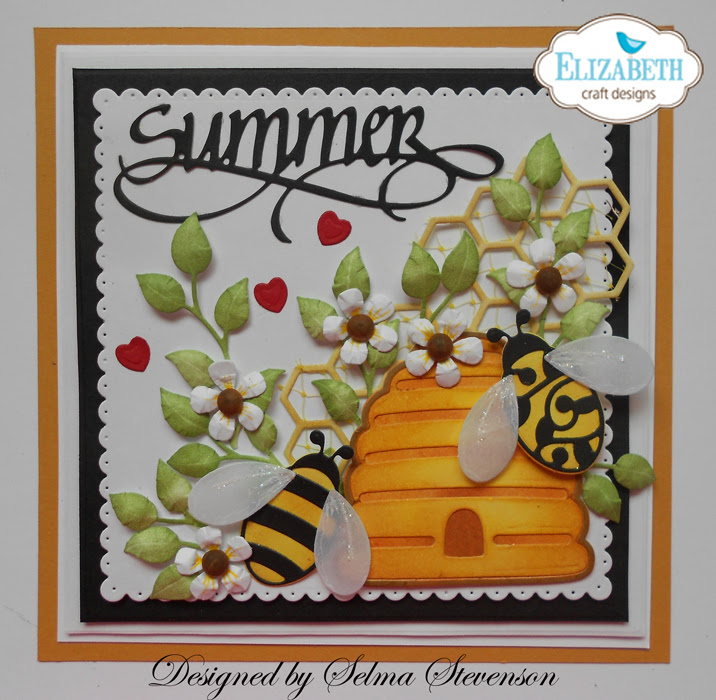 This is the card I designed for my design team blog post at Elizabeth Craft Designs.  I loved designing with card using Joset Designs Bee, Beehive, and Honeycomb die sets to create the background.  These Bees and their Beehive creates such a fun card!  Here is how to create this card:
Assemble the card as shown.  The Beehive and Bees were attached with dimensional glue dots.  One addition I added to the card is a piece of yellow netting, that I saved from a bag of lemons.  I added glue to the back of the Honeycomb die cut and placed it on the netting.  The netting was trimmed around the edges of the honeycomb die cut.

This card is just slightly dimensional so will fit into a regular 6x6 inch envelope.

The following supplies can be purchased from Elizabeth Craft Designs:

This is a Master piece, Selma!!
Everything on this card is GORGEOUS, I love this card!!
Thanks for your clear step by step explanation.
Have a nice day, hugs, Eva.

BEE-utiful card Selma !!! Love all the wonderful dies used on this amazing creation ...