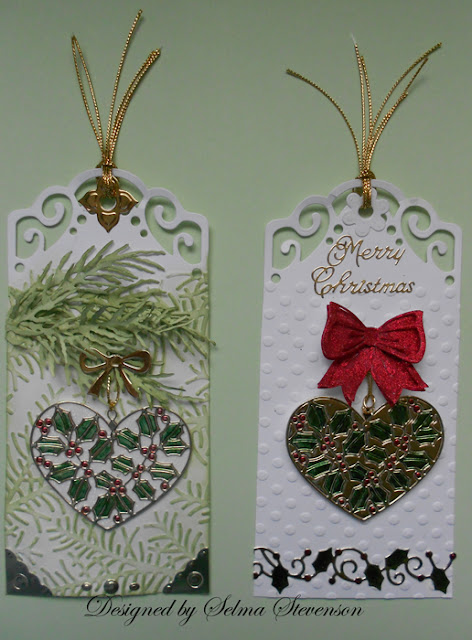 As promised yesterday, I have the other two tags I created using the Elizabeth Craft Designs Ornament Set 5. 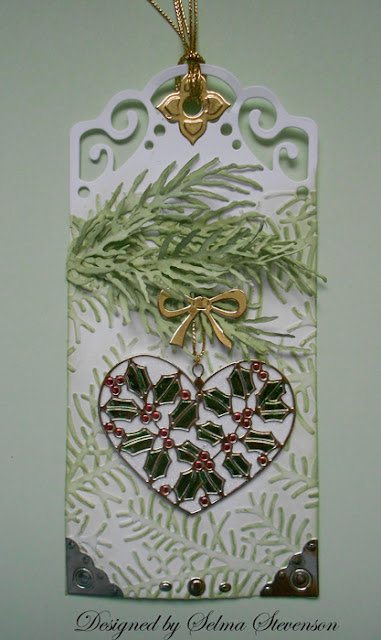 The tags were die cut using the Soft Finish Cardstock.  The front of this tag was embossed with the Sprig Embossing Folder.  I sponged the edges and Sprigs with Bundled Sage Distress Ink.  The solid part of this ornament was die cut using white card stock that had Clear Double Sided Adhesive Tape attached to the front side.  The adhesive cover was removed, and I covered it with Cool Diamond Silk Microfine Glitter.  The top part of the ornament was die cut using Gold Metallic Shimmer Sheetz that had the Double Sided Adhesive Tape attached to the back of the Shimmer Sheetz. I used the Metal Adapter Sheet for a better cut.   Before attaching the decorative portion of the ornament, I colored the Holly and Berries with Copic Markers. Did you know you can color Shimmer  Sheetz?  I added color twice to achieve a dark color.  I love how it turned out.  Once colored, I pulled out the extra die cut  pieces around the holly/berries, and attached it to the glittered background.

To match the embossed Sprigs, I die cut Garden Notes Whitepine Bough and attached at the top of the tag for dimension.  A gold cord was attached to the hanger of the ornament, and was glued under the pine bough.  I die cut the bow from the Ornament Set 3 set, using Gold Metallic Shimmer Sheetz that also had Clear Double Sided Adhesive Tape on the back.  Both the corners and the design for the top hanger on the tag were die cut using Gold Metallic Shimmer Sheetz.  I know in the photo that the corners look silver, but they are really gold.  The three little pieces, at the bottom of the tag, are discards from other die cut pieces.  Gold Cording was added at the top of the card.

This is the same die cut ornament, but love how different it looks.  The ornament was die cut using Gold Metallic Shimmer Sheetz with Clear Double Sided Adhesive on the back.   I did not use the Metal Adapter Plate, so it didn't cut all the way through.  I didn't want to pull out the extra pieces around the holly/berries, because I wanted a gold ornament. The holly and berries were colored with Copic markers. The adhesive cover was pulled off and the gold ornament was attached to the solid die cut ornament from this set, for stability. A gold cord was added to the hanger.

The Tags & More 1 tag was die cut using Soft Finish Cardstock and the lower portion embossed with the Lots of Dots Embossing Folder.  The red bow (Four Bows die set) was die cut using white card stock with Clear Double Sided Adhesive Tape on the front.  True Red Silk Microfine Glitter was added to the adhesive. The bow was attached over the gold cord with a glue dot.

At the bottom of the card I added the Holly Border that was die cut using Gold Metallic Shimmer Sheetz.  The Holly was detailed using Susan's Flower Tool Kit, then colored the same as the holly/berries in the ornament.  At the top of the card I added one of the pieces from the tag set for the gold cording to go through.  Christmas Gold Peel Off Stickers were added.

I am very happy with the four totally different tags created with the Ornament Set 5 and Tags & More 1 - Lace die sets.

Wow! These tags are so beautiful Selma, Cathy x

Selma, Your tags are beautiful.

Your tags are so lovely! They will certainly dress up any gift you use them on.