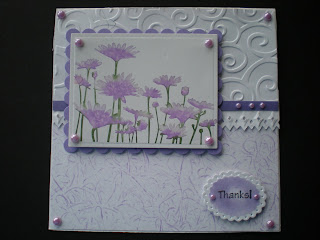 I have missed a few days posting to my blog because I have had a great friend visiting. We could spend all our time stamping but were trying to fit lots of other things too, such as touring this area of the country she has not been to, cooking, and just visiting. She loves to learn new things about stamping so had lots of things she wanted me to show her. We always have so much fun when we get together. Late last night, (I mean really late for me, it as midnight,) she was going through my tray of completed cards and she found the above card and fell in love with it. She really wanted to make one similar to it so we stayed up until she could completed one. She is very creative and made a lot of other very beautiful cards including one using Flower Soft that she fell in love with.

The above card is one I wasn't sure I liked, but since she loved it so much, I decided to post it today.

The stamp set used was Upsy Daisy from Stampin' Up!. Markers were used to color the image on the solid stamp. Two different shades of lavender was used on the flowers and Garden Green was used on the stems. The image was cut out using Classic Rectangle Nestabilities. The bottom of the card was created using a rubber band ball rubbed on Lavender Lace stamp pad then pounced on the card stock. The upper half of the card was embossed with the swirls Cuttlebug embossing folder and a Martha Stewart punch used for the border across the middle. The "Thanks" was stamped then cut with a Petite Circle Nestie and sponged prior to taking it out of the die. I love these Kaiser lavender flat back pearls purchased from Joan Fricker (Joan's Gardens).

Gorgeous card, love the colours you have used, and never thought about using rubber bands in a ball, so thank you for that tip
Jose

Selma,this is a beautiful card!
I also love the rubber band idea.
Your friend has good taste!!!!

I love everything about this card!!

It is gorgeous Selma!! My flight to WY was cancelled 10 minutes before boarding last night so I spent the night at the airport hotel - fun eh?? I hope to send you pics from the tetons soon! LOL

Selma, this card is gorgeous! I love the colors and have to try the rubber bands in a ball.

Beautiful card, love the soft colors and the rubber band idea fabulous. I need to try that. TFS

Ok, so you really know how I loved this card, and I know I just oohed and aahed over it, so thanks for sharing with all of the stampers that visit your blog. I can't remember is we spritzed the stamp after coloring with the marker or not. See how tired I am, you just wore me out. Thanks for all of the wonderful new techniques you shared with me, I am really looking forward to getting my own Flower Soft, and making some gorgeous cards...but never as good as yours.

I love this card, the color and the layout. I have not been well these days so I have stopped making cards for almost a week already. Will start again soon and follow your blog...Love, Anne