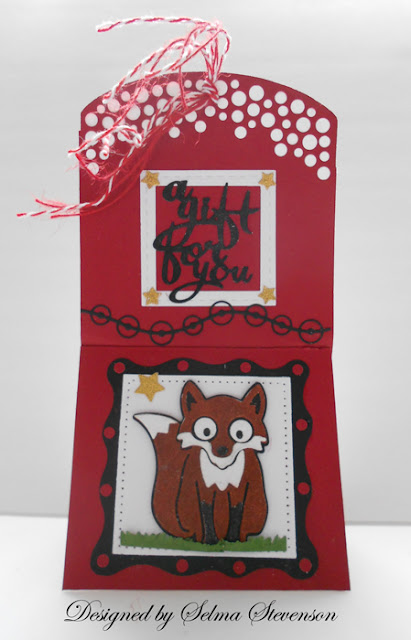 Today I have a fun project for you.  Karen Burniston asked if I would like to guest design for her Pop It Ups Designer Challenge with a Theme of Glitter.  It is always fun to work with Karen's Pop Up dies so I was delighted to participate.  All the creative projects completed by the designers for this challenge, can be found Wednesday, February 10th on Karen Burniston's blog.

I chose to create a tag with a pop up surprise at the bottom.  I used the Els van de Burgt Tags & More 9 - Sparkle for the tag.  It was die cut using white card stock then a second time using red card stock for the overlay design at the top.  This tag is approximately 8 1/4" tall.

There are two pieces to this tag.


For the lower half of the tag, cut a piece of red card stock 7 1/4 inches by approximately 4 1/4" (make it as wide as your tag).  Score across the middle creating a square piece.  It will measure approximately 4 1/4" x 3 3/4" when folded in half.  This piece will house the Pop Up which I will show you later.

To ground the fox, use the small grass die,  from the Props 7 die set ,and die cut 3 to fit across the bottom of the white Stitched Square.  The gold Star was die cut from the Happy Birthday Pop Up die set.  More about that later.

Assemble the white frame and fox as shown, on the front of the small red folded square.  Use the discarded dots from the top of the die cut tag, to decorate the edges of the black frame.

The red folded card will be attached to the bottom of the tag, but first decorate the top portion of the tag because you will need to add the Happy Birthday Pop Up inside this folded card.  Use the third square from the center of the Stitched Square die set to cut a white frame.  Once die cut, center the second smallest Stitched Square die in the center and die cut.  This will give you a cut out frame.  Attached this frame at the top of the red tag as shown.  Die cut the "a gift for you" using the die in the Gift Card Accordion die set.  Use white card stock that has Clear Double Sided Adhesive, then add Black Silk Microfine Glitter to it.  Use the Ribbons & Jewels die set to die cut the ribbon that is under the square on the top of the tag. 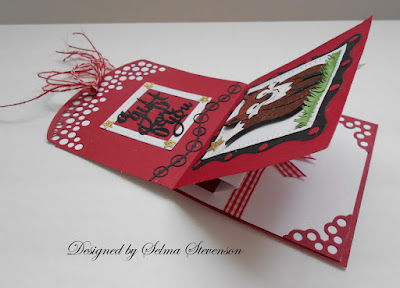 This is a side view to show how the Pop Up is inside, at the bottom of the tag. 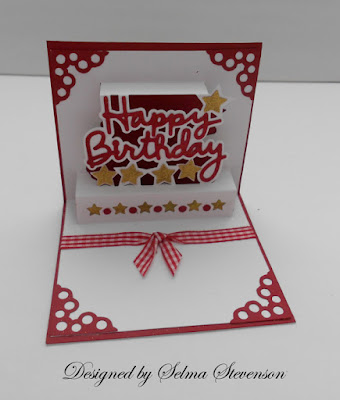 This picture shows the pop up at the bottom of the card, which is inside the red card.

To complete the inside of the red square at the bottom of the card, cut a piece of white card stock slightly smaller to fit inside the red piece and score it across the middle.  This white piece will be used for the Pop Up  .Use the Happy Birthday Pop Up die to die cut the Birthday Pop Up.  You can see how to use this die in Karen's YouTube Video at this LINK. The Happy Birthday was die cut with Clear Double Sided Adhesive and True Red Silk Microfine Glitter added to the letters.  The large Stars were die cut twice and Solar Gold Silk Microfine Glitter added.  Five of the large stars were added to the inside and one was used on the outside  by the Fox.  A strip of white card stock, with adhesive, had Solar Gold Silk Microfine Glitter added and was glued behind the small star die cuts.  The Corners 1 die set was used for the four red corners.    In between the stars, the dots from the Corners 1 die cuts were added.  A red/white gingham ribbon was tied around the bottom of the white Pop Up before it was attached to the red card.  The red card was attached to the bottom of the tag using 3/8" Clear Double Sided Adhesive.

I hope you enjoyed my project.  Be sure to visit Karen's BLOG Wednesday to see all the Challenge Cards.

As always your work is just amazing!!!!

Adorable card Selma,
I have been around, not commenting much, always love your work, you will notice I unsubscribed from your blog, I may be going into the hospital in a week or so, I have some health issues to take care of, and am so tired of hitting the DELETE button, so am unsubscribing from all and will re do when I am better.
Take care
hugs
Donna

Well isn't that just too clever! I love this design and the fact it pops up is amazing! It seems everything you touch turns to lovely!

Selma, what a GREAT idea to make a Pop Up Tag!!
I have never seen before.....and I love it!!
The little Fox is very sweet and cute!! It's a wonderful tag!!
Hugs, Eva.

Selma, Your work always amazes me. Just terrific, my friend!

Oh wow - this is such a creative idea!