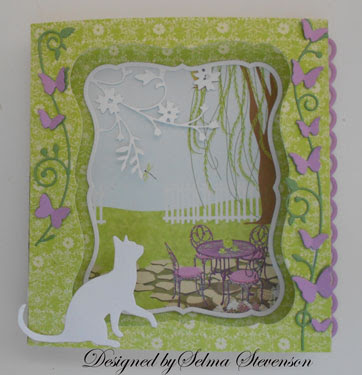 Yesterday I received a bunch of new Memory Box and Poppy Stamp dies from Joan's Gardens.  Wow!  They are all so beautiful I hardly knew where to start. .  Making choices will be hard!  I love working with dies because it is such an easy way to create a quick card.

I have not created a Shadow Box card for a long time, so decided the Memory Box "Honey Blossom Frame" would look great inside one.  I started with two pieces of card stock cut 7" x 6".  I scored down both sides of all four pieces at 7/8" so with the folds, the width of the front of this card is 5 1/2" x 6".  I used design paper from the Best Creation "A Walk in the Garden" 6x6" paper pad for everything on this card.  I love the little outdoor scene and thought it would create a beautiful background for the "Honey Blossom Frame".  I used the Memory Box "Debutante Frame", which is a solid backing frame, to go behind the die cut "Honey Blossom Frame".  This frame also works with many of the other Memory Box die cut frames.  A piece of 5 1/2" x 6"   design paper was attached to the inside of the shadow box.  Don't attach the die cut frame yet.

To create the front of the shadow box, I first cut a piece of the design paper and glued it to the center portion of the front of the box, like I did for the inside.  The Memory Box "Debutante Frame" die was centered  over that design paper and die cut. Be sure to tape it down so it doesn't move.   Now I have the opening that matches the "Honey Blossom Frame" that will be inside the shadow box.  The front and back pieces were laid flat on top of each other, then the "Honey Blossom Frame" (with pop dots on the back) was placed in the opening and pressed down onto the inside of (the bottom of) the box. 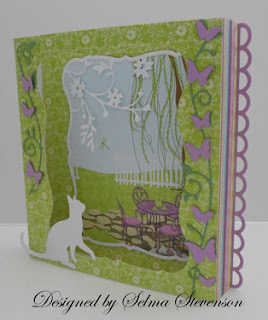 To complete the decoration on the front (top) of the shadow box, I used a stripped piece of design paper, from the same paper pad, for the sides.  On the front I die the Memory Box "Butterfly Vine Border" twice - once in green and once in purple.  The top portion of the green border was placed on the right side of the frame and the left over part (bottom portion) was attached to the left side.  This beautiful border is 9.6" long and is very easy to divide if you want smaller portions.  The little butterflies were cut off the purple border and glued over the butterflies on the green border. 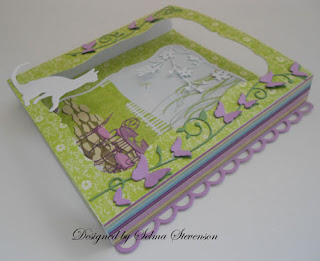 You can see in this picture how the "Honey Blossom Frame" is down inside the shadow box.  To add a little more dimension, I die cut one of the new Poppy Stamps cats - this one is the "Large Curious Cat". Poppy Stamps has a lot of new cat and dog dies cuts.   It was attached along the bottom of the frame with a piece of ScorTape.   The trim I used along both sides of the box was die cut using the MFT "Little Open Scallop Strip.  This border is 6" long and fits perfectly down the sides to complete this card.

Gorgeous! I just love it!

This is so cute - I have seen all the new dies and of course I want them all but that will take time. Love your creations.
Judy

Beautiful. I love the cat looking out.

Beautiful. I love the cat looking out.

Lovely creation. Always think your shadow boxes are so great!

What a fabulous piece of work!