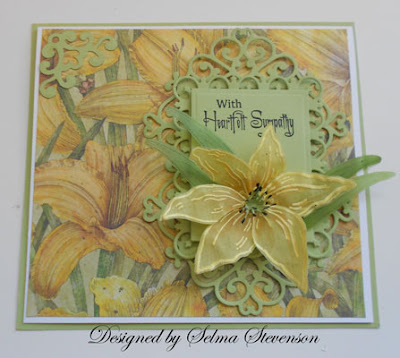 I just realized I forgot to post some of the cards I created for the Heartfelt Creations new "Flora Cross Collection" this month.   This card was designed using the largest lily from the "Pristine Lilies PreCut Set" (HCPC 3452).  It was stamped with VersaMark and embossed with a pale yellow embossing powder on yellow vellum.  It was die cut with the matching die from the Cross and Lilies, (HCD 719) Spellbinders die.  To help separate the petals, I used scissors to cut between the petals, down toward the center of the flower.  It was then spritzed with a fine spay of water.  Within a minute, the water caused the vellum to curl.  I shaped it while it was still damp. A punched stamen was added to the center of the lily.

The design paper was from my old stash of paper.  The pretty die cut behind the lily is one of the Heartfelt Creations dies in the "Decorative Chateau Gate Die Set (HCD 718).  I die cut two of them - one for the top and one for the bottom.  On top of that I added a Spellbinder "Fleur de Lis Rectangle", then a plain Spellbinders rectangle on top of that one.  The sentiment from the Heartfelt Creations "Cross and Lilies PreCut Set" (HCPC 3450).  It was black embossed at the top of the rectangle.  A Spellbinder corner was added to complete this card. 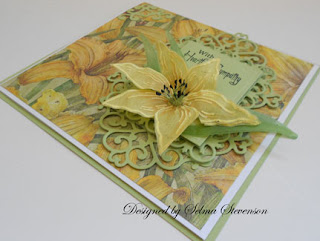 Just started following you but lurked for awhile. I love this card. So beautiful. We are neighbors! I'm from Nine Mile. Nice to see such great talent this side of the state!

Oh my what a stunning card Selma! The colours and that lily is just so beautiful. I'm just blown away with it....you clever and oh so talented lady!

You inspire me! Such a lovely lily! Your card is truly beautiful!

What a wonderful card Selma. The lily is just so beautiful. Hugs Rita xxxx